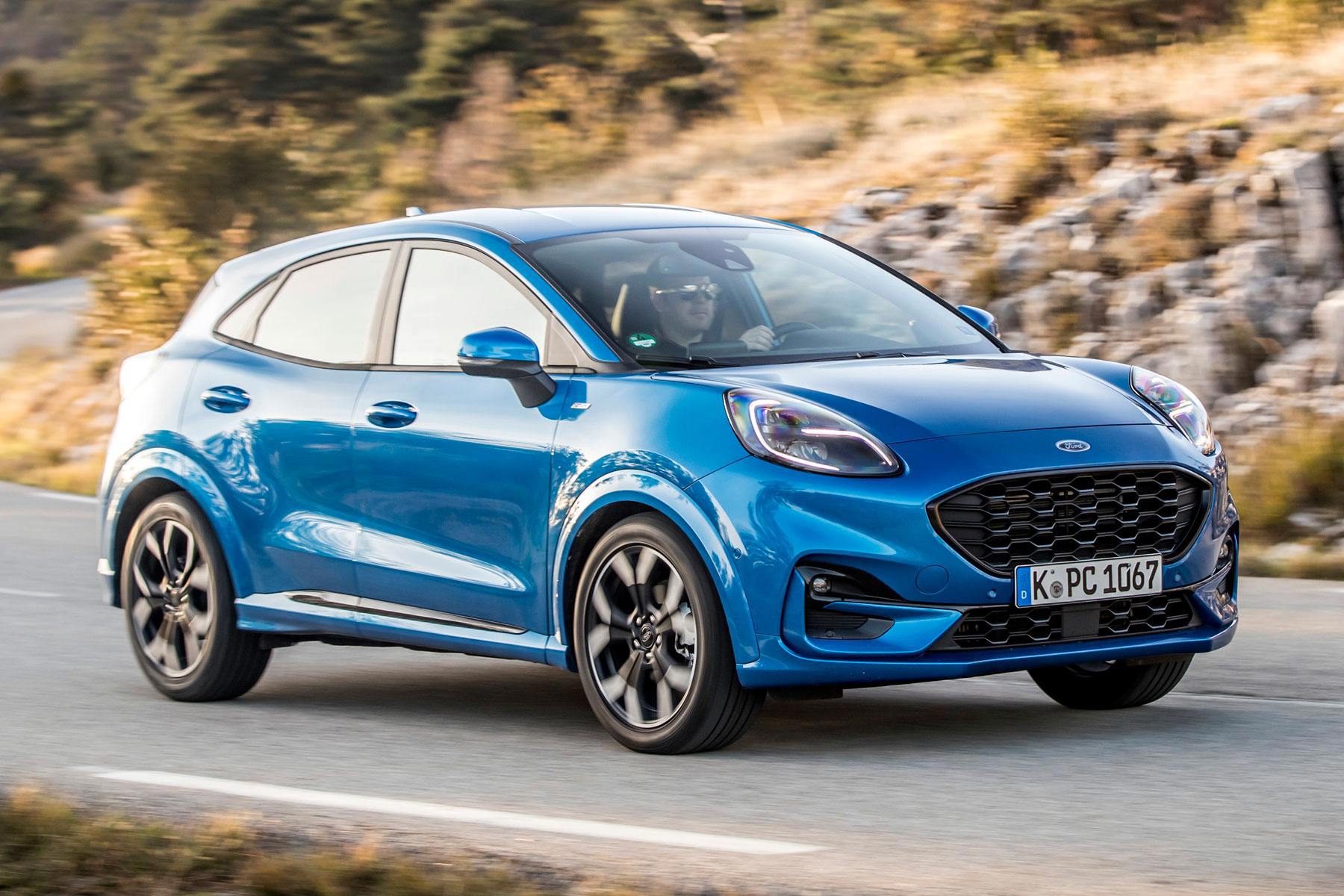 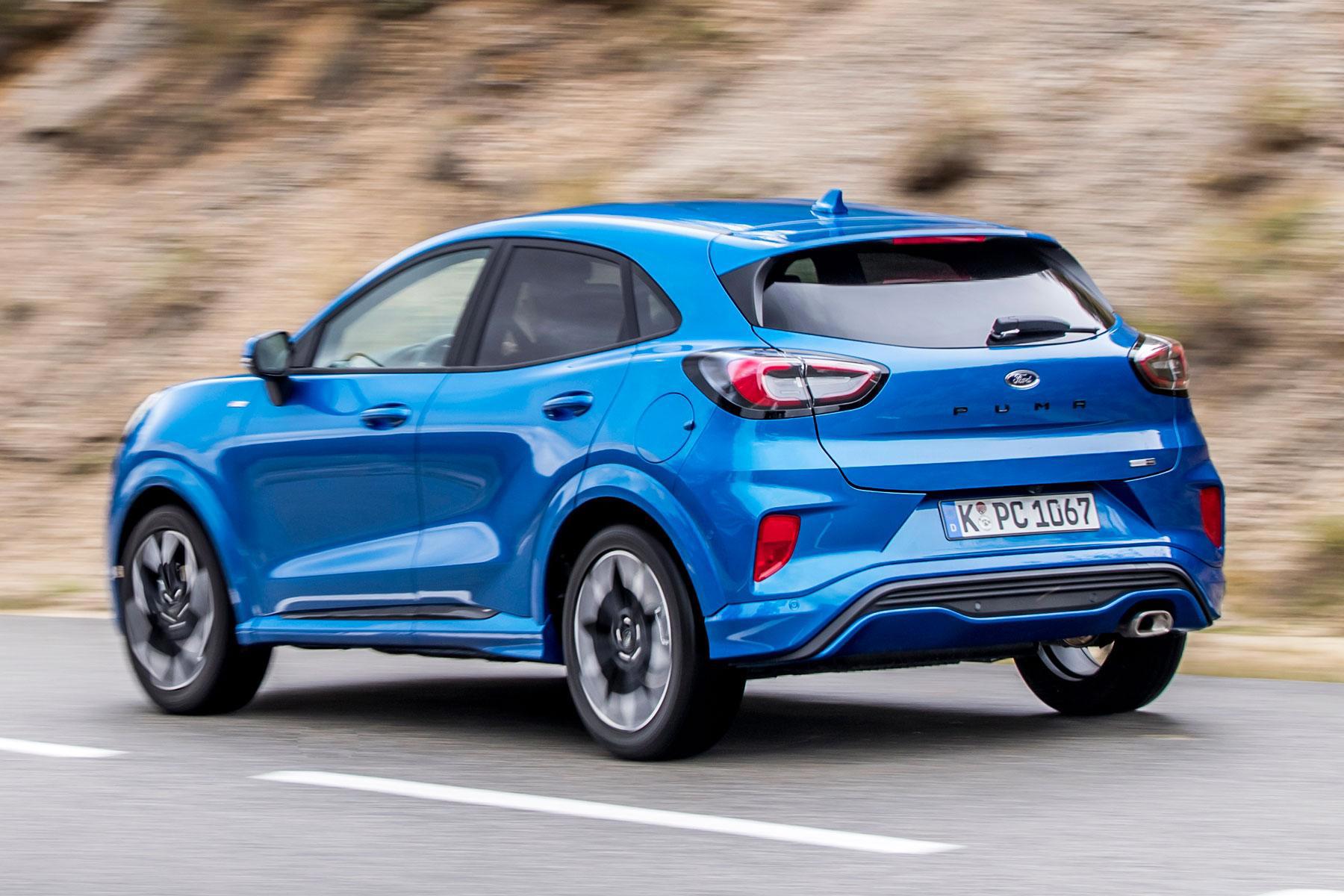 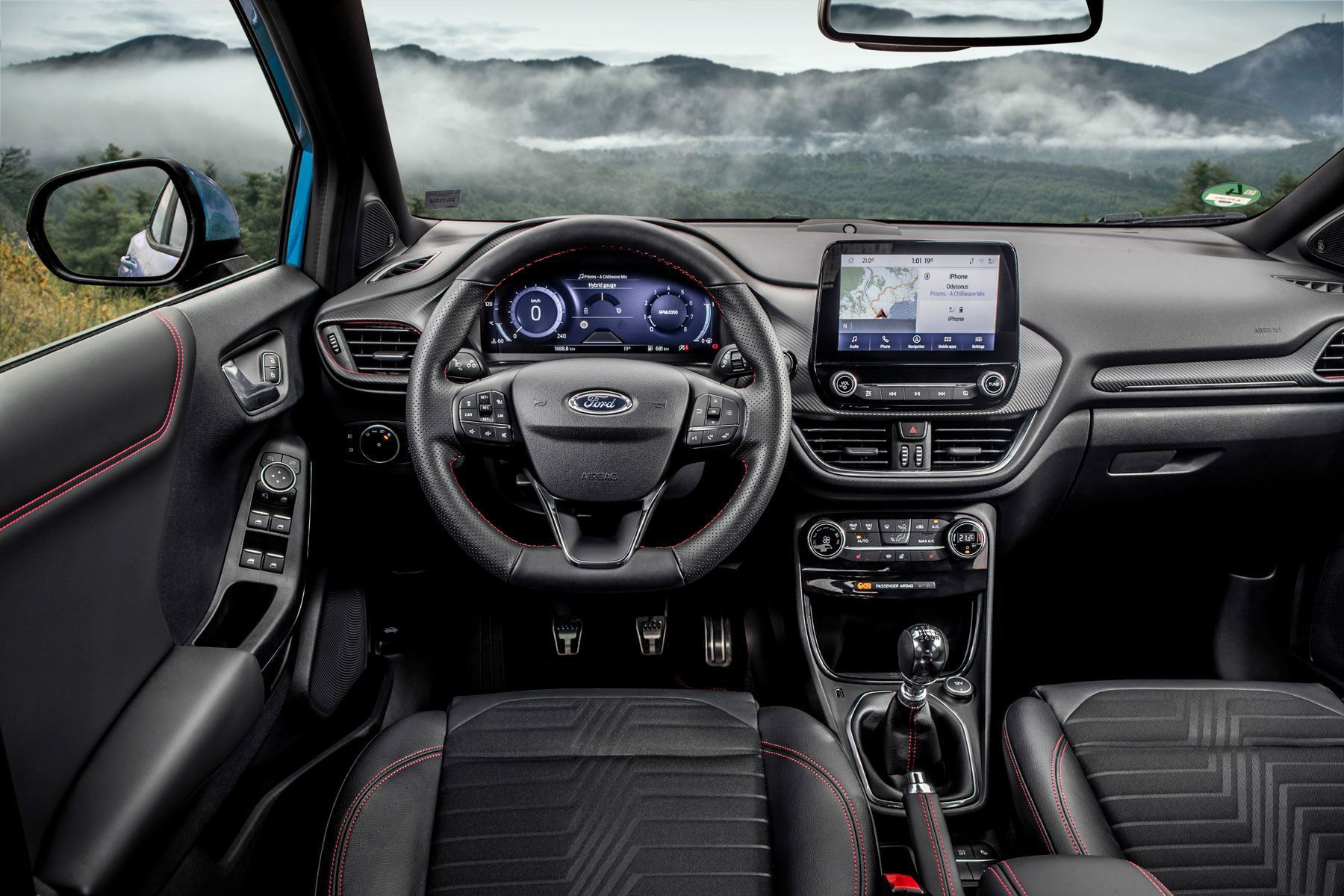 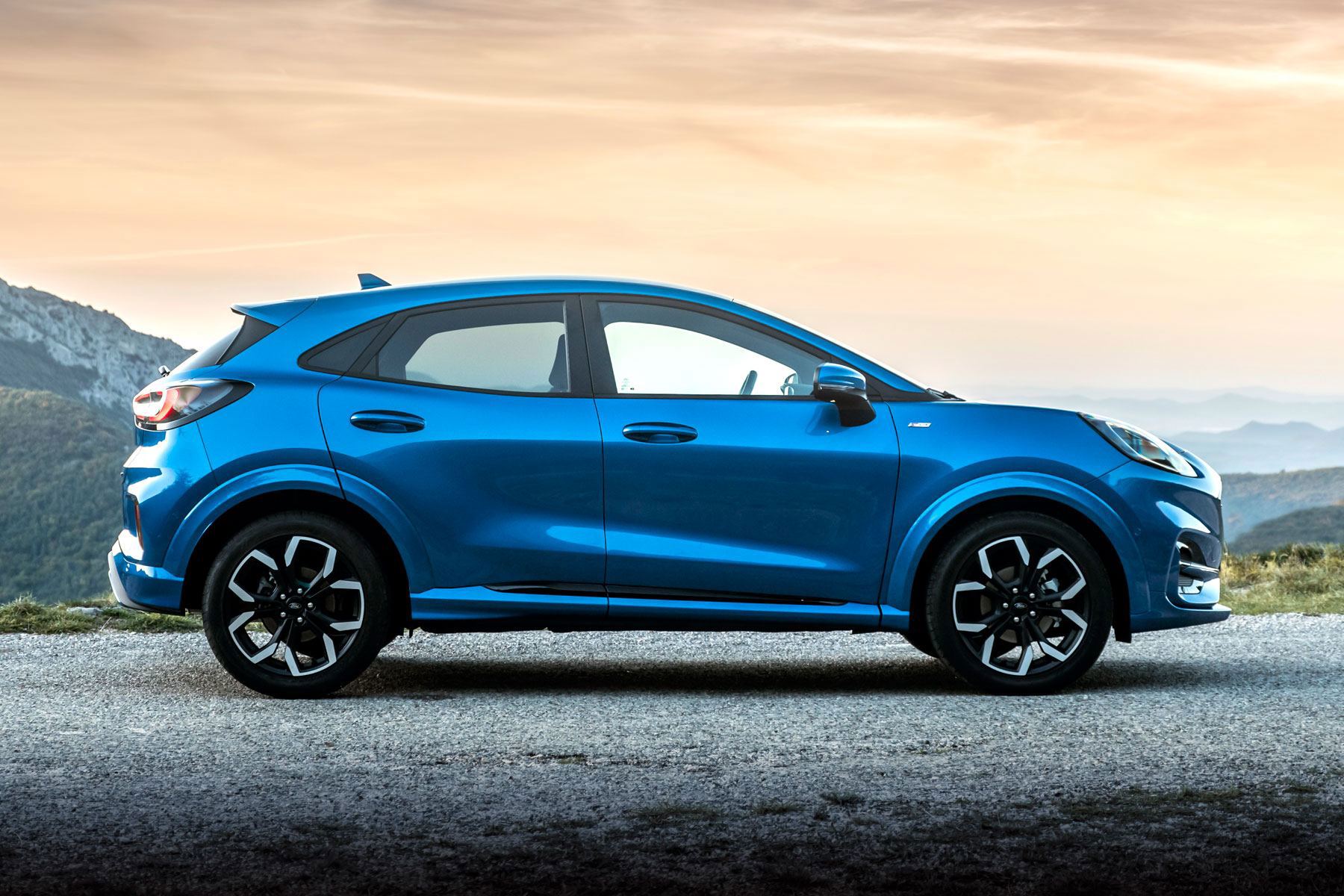 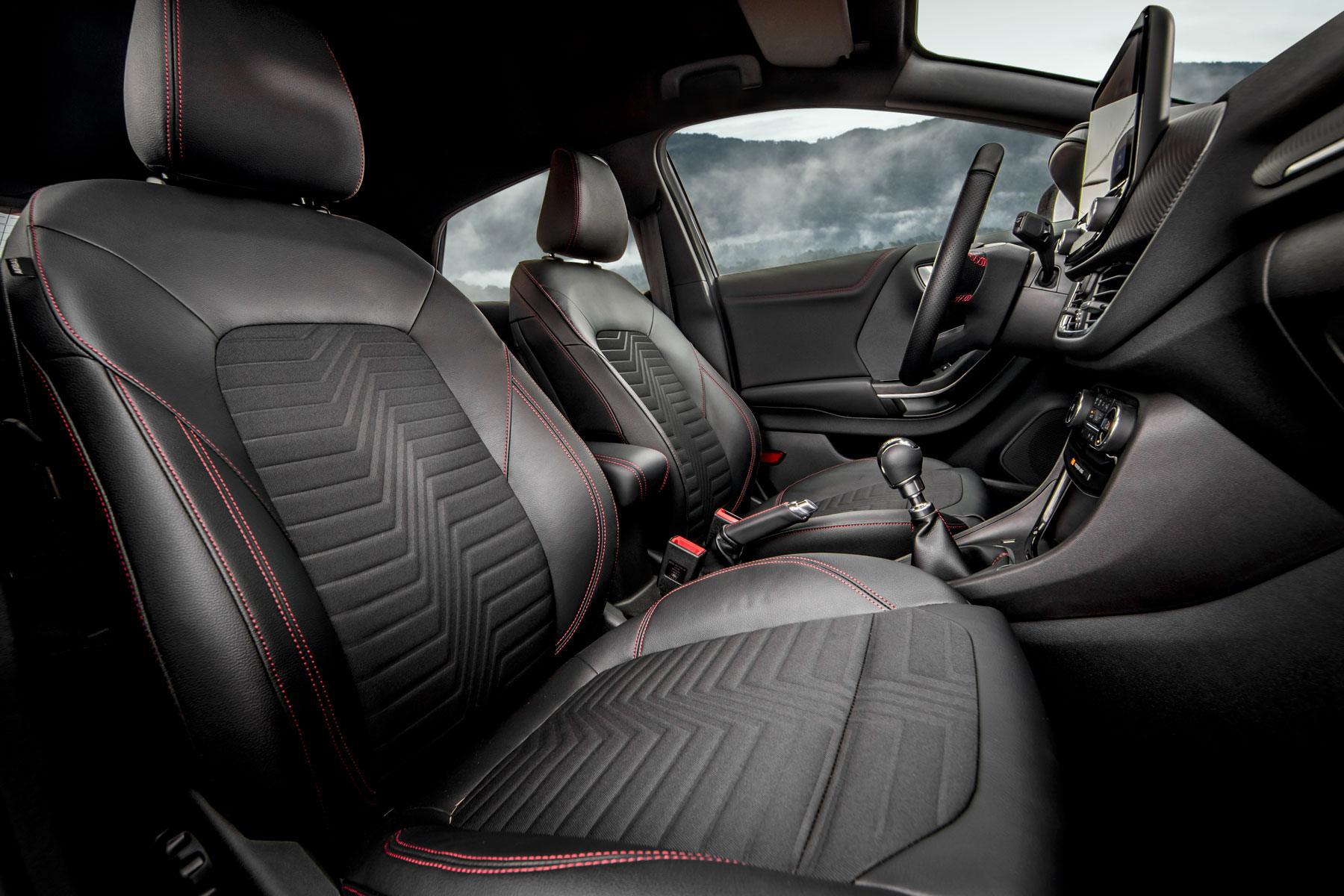 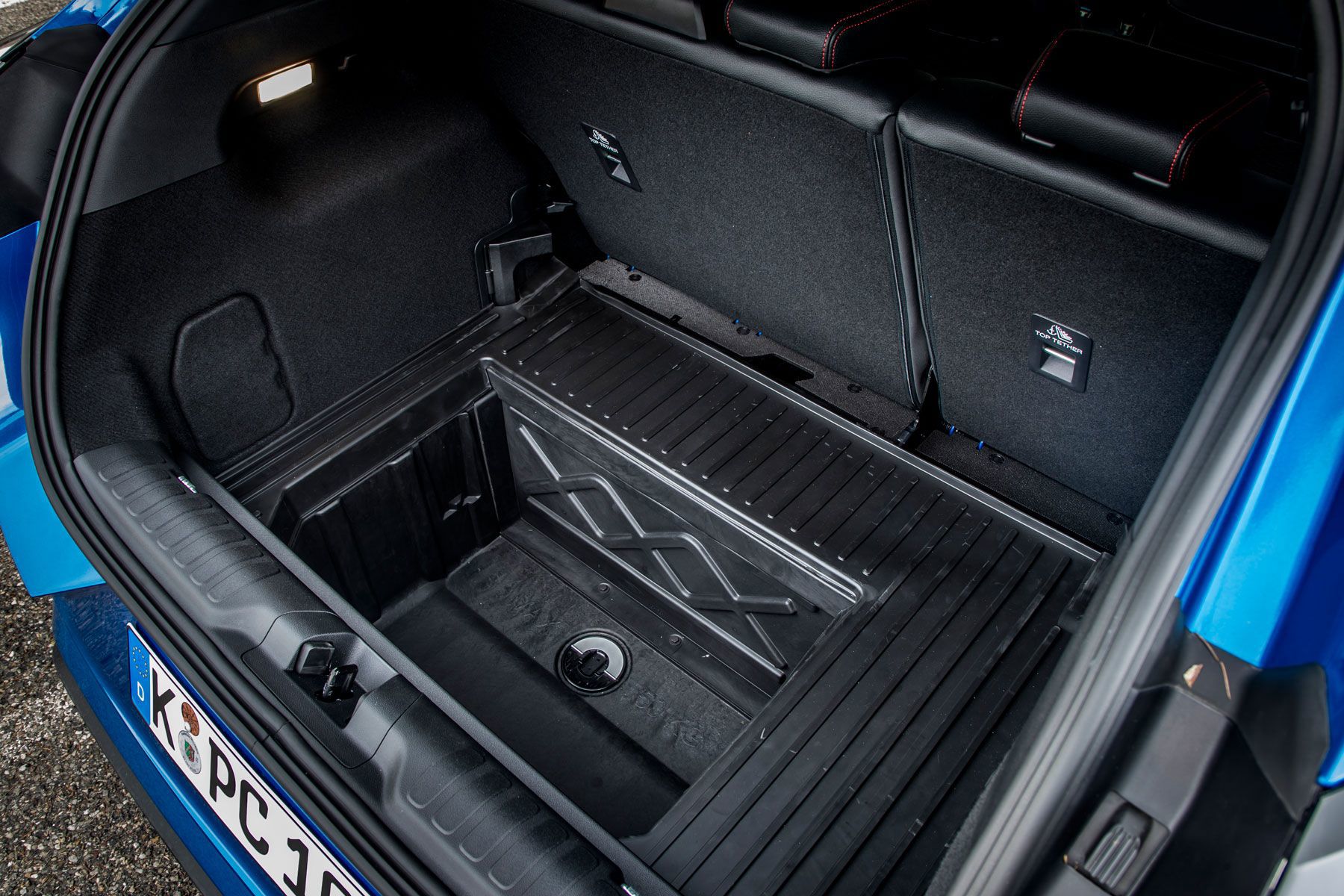 When Ford revived the Puma name in 2020, it didn’t just bring back a fondly remembered moniker, it brought back the same driving fun the original Puma coupe was famed for. In an instant, the Puma SUV wrongfooted all of its competitors that might have thought they were good fun to drive. It was a crafty move from Ford and, even if outright handling and agility are not top of your list, they are handy to have if you need to change direction in an emergency.

Ford backed up the excellent driving manners of the Puma with a fine range of engine options. There’s the 1.0-litre EcoBoost petrol motor in 125- and 155hp outputs, and both of these options come with mild hybrid assistance as standard. For the rapid ST hot hatch model, there’s a 200hp 1.5-litre petrol turbo engine, and this version makes you wonder why you’d buy a more traditional small hot hatch now.

If you think the Puma is only about fun, think again. It has a generous boot, and that’s before you lift up the luggage bay carpet and find the massive additional space beneath which is big enough to hold a couple of suitcases. There’s plenty of room in the back seats too, though the high window line and dark interior fabrics make it feel a little gloomy and claustrophobic in here. In the front, it’s much better, but again the high waist line and sloping roof mean the driver’s vision over the left shoulder is not fantastic.

Neither of these demerits are major flaws with the Puma, which appeals with plenty of kit in even the entry-level trim. It’s also priced to compete head-on with key rivals such as the Peugeot 2008 and Volkswagen T-Roc, with the Ford offering strong value for money.

Small SUVs are built with practicality as one of their main roles in life, and the Ford Puma does not disappoint on this front. This is exemplified by its generous boot space, which would be good enough to mix with its main rivals just on the amount of space when you lift the tailgate. At first sight, it looks better than average for the class, but then you lift up the boot floor to reveal the deep storage well that Ford calls a ‘megabox’. It’s big enough to hold a couple of carry-on flight cases and it’s finished in hard-wearing plastics, so it’s ideal for stashing muddy boots or wet clothes after a day out with the kids. There’s even a drain plug in the bottom to help hose it out afterwards. Just about the only small criticism of the boot is the load sill lip doesn’t sit flush with the floor.

A 60-40 split and fold back seat allows you to free up even more cargo room when you need it, and the seats are easy to tip and pull back up into place. With them upright, there’s as much space in the back of the Puma for passengers as in most of its rivals. Adults will find it a little snug on headroom due to the slope of the roof, but it’s ideal for kids. However, there is a note of caution here as the high waist of the Puma combines with the dark upholstery fabric to make it feel a little cramped and enclosed back here. Smaller children will certainly want a booster seat to help them see out.

Sit in the driver’s seat of the Puma and all is right with the world. There’s plenty of adjustment in the steering wheel as well as height adjustment for the seat. It offers a typically Ford fine driving position, though rear vision over the driver’s left shoulder is limited when parking or changing lane. At least rear parking sensors are standard on all models to counter this as you slot into a car park bay. On longer drives, the Puma offers good seat support and all-day comfort, though models with the larger 18-inch alloy wheels suffer from a bit too much road noise at motorway pace.

The dash is very similar to the Ford Fiesta that the Puma shares its main underpinnings with, so you get a clear, crisp instrument display. Digital dials are standard on the ST-Line models, while an 8-inch touchscreen takes care of the infotainment. It uses Ford’s SYNC 3 Navigation set-up, which is simple to use and the screen is one of the quicker ones to react to your finger’s touch. It comes with Apple CarPlay and Android Auto, and it’s easy to pair with your smartphone via Bluetooth. The higher trim levels also add four extra speakers.

Ford enjoys a reputation for making cars that excel in their respective classes for the way they drive. The Puma follows this pattern and is the star turn in the small SUV sector for driving fun and excitement. While this may not be the main priority for many drivers, it’s good to have there when you do want to indulge, and it also means the Puma is very sure-footed when you have to suddenly avoid a hazard. It always feels like there’s grip and traction to spare, while the steering responds with accuracy and more feel than you get in most of the Ford’s rivals. However, as you cruise along the motorway, the Puma also pulls off the clever trick of feeling relaxed.

The Titanium and ST-Line models come with 17-inch alloy wheels as standard and they have the best ride comfort. Lumps and bumps are dabbed away with little notice given to them, while the 18-inch alloy wheels of the higher trim versions do the same but with a little more noise filtering into the cabin. At higher speeds, these bigger wheels generate a bit more noise, too. In the ST hot hatch version of the Puma, it’s not so evident as its sporty nature compensates.

When you use the full power of the ST, it’s a very quick car thanks to 0-62mph in 6.7 seconds, which is on a par with the Fiesta ST. This is courtesy of the ST’s 200hp 1.5-litre EcoBoost turbo petrol engine, which is a real pleasure to use and comes with suitably sporting growl when revved hard. Ford also supplies the ST with its own selectable driving modes, so you get a Track setting in addition to the Normal, Sport and Eco options with other Pumas. The rest of the Puma range also have a Slippery & Trail mode to help on rougher surfaces, but the Ford is not offered with four-wheel drive or any other off-roading technology.

The other Pumas in the range all used Ford’s excellent 1.0-litre, three-cylinder EcoBoost turbo petrol engine coupled to mild hybrid tech. It’s not able to run solely on battery power, so the hybrid set-up is there to offer a bit of extra assistance at lower engine speeds before the turbo starts to work. It also has stop-start, so there are some welcome fuel savings to be made.

The 125hp 1.0-litre engine is ideal for most situations, and there’s the option of a seven-speed twin-clutch automatic gearbox in place of the six-speed manual transmission. The 155hp engine is a bit more peppy, but not so much that you notice in everyday driving. Whichever of these two motors you choose, the Puma is very good to drive and serves up more interaction, stability and precision than any of its rivals can muster.

Value for money: how much does a 2020 Ford Puma cost to buy and run?

Ford goes straight in with the Titanium trim as the opening point for the Puma range. It’s well fitted out with 17-inch alloy wheels, Quickclear windscreen, SYNC 3 infotainment system, cruise control, and an array of safety kit from £23,645. The ST-Line costs from £24,595 and it gains a sports suspension and body kit, and digital instrument cluster with 12.3-inch display. Move to the ST-Line X and from £25,695 it adds 18-inch alloys, rear privacy glass, four extra stereo speakers, and wireless phone charging. The Vignale begins at £27,345 and focuses on luxury with its keyless ignition, climate control, heated front seats, and Sensico man-made leather upholstery. Then there’s the rapid ST that costs from £29,770 and comes with 19-inch alloy wheels, as well as unique body styling and suspension.

Savings of up to £2500 are possible on a brand new Puma, so it pays to shop around. If you’re looking at a used model, prices start from £21,000 for a three-year old example with average miles for its age.

Running a Puma should not challenge your bank balance. The 125hp 1.0-litre model offers up to 52.3mpg combined economy and 122g/km of carbon dioxide emissions, so road tax is not onerous. The 155hp motor is not far behind with 51.4mpg and 124g/km, while choosing the DCT automatic gearbox sees these figures increase by a small amount. The hot hatch ST serves up 42.8mpg and 148g/km CO2 output. Insurance for the 1.0-litre Puma models falls between groups 11 and 17, while the ST resides in group 22. As for servicing, Ford dealers are among the more keenly priced.

The Ford Puma is a car that answers the needs of almost every driver. Need something practical and affordable to run, the Puma has it covered. Want a sporty small car with space for the kids? Yep, the Puma does that too. Unless you need big back seat space or a serious off-roader, the Puma is not only a sensible choice, but an enjoyable one as well.

With mild hybrid tech used in all of the 1.0-litre models, fuel economy and emissions are very reasonable, and the Puma is very good at long distance driving. It’s nimble in town, great on back roads, and has a huge boot. Every version is also well equipped and Ford has pitched prices keenly compared to the car’s direct rivals. 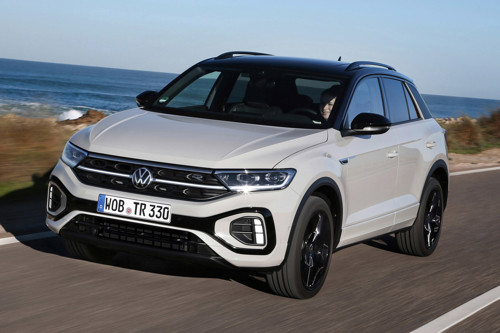 The T-Roc comes with distinctive looks and that Volkswagen badge that appeals to so many drivers. It’s offered with a wide range of options to let you personalise the car to your own tastes, and it also has a cabin that feels a step up from the Ford Puma’s in quality and finish. The 1.0-litre TSI turbo petrol engine is a great choice in the VW, but the T-Roc cannot match the Puma for handling or driving fun. There’s even a convertible version of the T-Roc, but it’s very far from being a practical small SUV. 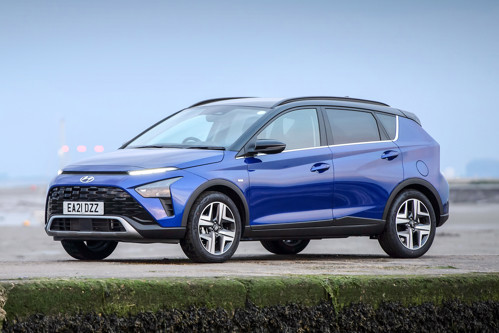 Hyundai’s Bayon is one of the most keenly pitched cars in the small SUV segment when it comes to price, and it doesn’t skimp on specification to achieve this. Every version comes with mild hybrid power, just like most Ford Pumas, and it drives in a way that suggests it should be more expensive. It’s not nearly as engaging to drive as a Puma, but Hyundai has got comfort and refinement sorted in this car. Where the Bayon misses out is rear cabin space, which is more cramped than most of its rivals.

Always keen to get into a niche and make the most of it, MINI did just that with its original Countryman and this latest version carries on this work. It offers drivers a slice of something that feels more upmarket than most of its rivals, though this does come at a price and you will almost certainly have to raid the options list to finish the car to your liking. It’s one of the few small SUVs to get on terms with the Ford Puma in the way it drives, but the MINI has a very firm ride that undermines it as a car for longer journeys.