Crisp modern styling for the Peugeot 2008 is matched by a wide range of power options.

There is a clear link between the Peugeot 2008 and the 208 supermini it’s based on. This is a different approach from the French manufacturer to, say, Ford with its Puma and Fiesta or Nissan with the Juke and Micra. The family resemblance is a strength for the Peugeot as the 208 is a very good looking small hatch and the style translates well into the 2008 small SUV.

As with all current Peugeot models, the 2008’s driver environment is dominated by the i-Cockpit design. It places the steering wheel surprisingly low down and the main instrument display above it, so you don’t look through the wheel to see the dials. It can take a little getting used to, and some drivers won’t gel with it. However, there’s no doubting the good quality of the materials used in the 2008 and its solid fit and finish.

The 2008 also comes with plenty of standard luxury and safety equipment in all models. The popular GT trim is little pricier than many would like, but it doesn’t stop many choosing it thanks to its bold looks. However, the 2008 can have a firm ride, especially in battery-powered e-2008 form.

Peugeot is one of the few in this sector to offer a full spread of power options, including the e2008 alongside its petrol and diesel siblings. It gives buyers a real choice to hone the car to their needs and routine driving patterns. Whichever power source works for you, the 2008’s cabin offers lots of space for people and luggage, though the boot is not quite as big as a Ford Puma’s. Not does the 2008 handle with the Ford’s deft ability, but the French car does offer stable, undemanding handling.

The first thing you notice when you step into the Peugeot 2008 is the i-Cockpit dash design. It deliberately places the steering wheel lower than its competitors, and it can seem a little strange at first. It also has the main instrument pod above the upper edge of the steering wheel, so you look at the dials over the wheel rather than through it. After a while, you don’t really notice it, though there doesn’t seem to be any real benefit to this design. However, it has no impact on how comfortable the driving position is and all but the entry-level Active Premium model comes with driver’s seat height adjustment. There’s also reach and angle movement for the steering wheel to get the ideal seating position.

All of the controls the driver comes into contact with have a good quality feel and finish. The soft-touch leather steering wheel imparts a sense of luxury, and Peugeot does very well in the way it blends materials and colours inside the 2008. A few harder plastics can be found on the lower parts of the dashboard, but nothing that detracts from the overall air of above class average quality.

There’s also a good amount of space for the driver and front passenger, while the infotainment set-up uses a 7-inch touchscreen in the lower trim versions. You have to move to the GT versions to get the larger 10-inch touchscreen. With the smaller screen, there’s no in-built sat-nav but you can access navigation from your smartphone using Apple CarPlay or Android Auto. The display is easy enough to use on the move, but the larger version in the GT models is better and clearer to read.

Peugeot supplies shortcut buttons beneath the infotainment screen to help take you to the most commonly used menu pages, such as for the climate control or stereo. Unlike the Skoda Kamiq, there are no physical buttons for the heating and ventilation. Couple that to the 2008 screen’s slightly delayed responses to your finger’s input and it can be a bit of a faff to adjust the heating or change radio station. GT models come with wireless phone charging, which is a boon.

Move into the rear seats of the 2008 and you find it’s quite snug in here for adults compared to the amount of room in a Skoda or Ford. Children won’t mind and there are Isofix kiddy seat mounts on the two outer chairs, plus triple point belts for all those in the rear.

The boot is a bigger success for the 2008 as it offers 434-litres of space, which isn’t quite as much as a Ford Puma but still very handy when it comes to packing in a big weekly shop. The rear seats split 60/40 and fold to leave a long, flat floor for bigger items, but there’s no clever folding arrangement as there is in a Honda HR-V.

The Peugeot 2008 is unusual in the small SUV sector for being offered with petrol, diesel and electric power. It gives drivers a wide choice to pick a car that suits their needs and, while EV is increasingly seen as the way to go for many, the Peugeot still makes a good case for its more traditional power units.

There’s a trio of petrol options on offer and all are 1.2-litre motors. They start with the 101hp motor that is only offered with a six-speed manual gearbox. As with many three-cylinder engines, it’s a peppy performer and feels very at ease in town, though on the motorway you will prefer the added oomph of the 130hp version. This more potent offering can be ordered with the same six-speed manual ’box or an eight-speed automatic. The auto takes a lot of the strain out of city driving, but it can feel a little sudden in the way it takes up power as you pull away. Go for the most powerful petrol in the shape of the 155hp 1.2-litre engine and it only comes with the auto transmission, which it’s well suited to. However, unless you really crave the extra acceleration this engine provides, the 130hp unit is the best all-round bet.

For those wanting a diesel, Peugeot continues to fit its 1.5-litre BlueHDi motor with 110hp and useful lug of low-down shove. It’s attached to the six-speed manual gearbox as the only transmission choice, but it offers combined fuel economy on a par with its direct rivals.

Then we come to the e-2008 with its all-electric power. It uses a 136hp motor that delivers similar shove to the diesel engine. The difference is the e-2008 has instant pull as soon as you press on the accelerator pedal, so it feels nippier off the mark. As you’d expect, the EV version of the 2008 is also very quiet as it drives along and there’s only a modicum of wind and road noise at higher speeds. In the petrol and diesel models, the engines are refined.

With every engine version of the 2008, the GT models have larger wheels and this affects the ride quality. In this trim, the 2008 picks up on too many small surface imperfections to ever feel really settled in the way a Skoda Kamiq does. In the other trims, the ride is much more absorbent and pleasant. The 2008 handles well and offers up plenty of grip for predictable, safe cornering or emergency moves.

Every 2008 comes with a raft of safety equipment as standard, but you can only add adaptive cruise control as an option to the Allure Premium and GT models, which is standard on the GT Premium. These two trims are also the only ones available with Peugeot’s Advanced Grip Control as an option to help with driving on loose or slippery surfaces.

Peugeot comes at the small SUV sector from all angles thanks to the car being offered with petrol, diesel and EV power options. All are good to drive and cost-effective to run, though you have to be careful you will be happy with the firmer ride of the GT models. You might also need a little time to adjust to the i-Cockpit interior design that places the small steering wheel lower than in other cars. More of a sticking point is the infotainment system that can be slow to react to inputs.

Rear seat space is not a strong point for the 2008, but it’s fine for kids and the boot is a generous size. There’s a lengthy list of standard equipment in all models, as well as plenty of safety kit included as standard. The GT models are very appealing but are pricier than some rivals. 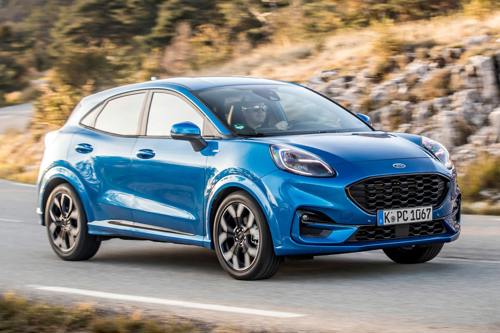 The Ford Puma has established itself as the do it all car in the small SUV class. It drives with all of the verve that we’ve come to expect of Ford cars while also offering up excellent comfort and refinement. There’s no EV version, but Ford does offer the Puma with petrol-electric hybrid power for low running costs. Inside, it’s well made and generous with space, though the rear seats feel a little closed-in due to the high window line. However, there are no complaints with the large boot and its ‘megabox’ additional storage. 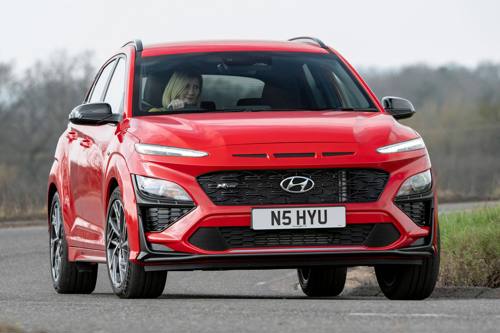 A hybrid version of the Hyundai Kona comes with low running costs and is easy to drive. Its long list of standard equipment in all models also gives the Kona plenty of appeal, which adds to the car’s strong value along with its five-year warranty cover. Hyundai has blessed the Kona with one of the easiest to use and understand infotainment systems in this, or any other, class. However, the Kona has firm, bumpy ride, and the cabin is not as big or practical as many others in this sector.

If you can look past the higher prices of the Countryman, which start where the Peugeot 2008 is well into the thick of its mid-range models, the MINI is an appealing prospect. There’s the option of a plug-in hybrid model alongside the zippy petrol motors, and the MINI’s reputation as a fun car to drive is well deserved. You will have to balance this against the Countryman’s nigglingly firm ride and a cabin that doesn’t offer as much space as the class best. However, the rear seats are more adaptable than in many small SUVs.