Big enough to be practical, small and easy in town – SEAT’s Arona is an impressive SUV. 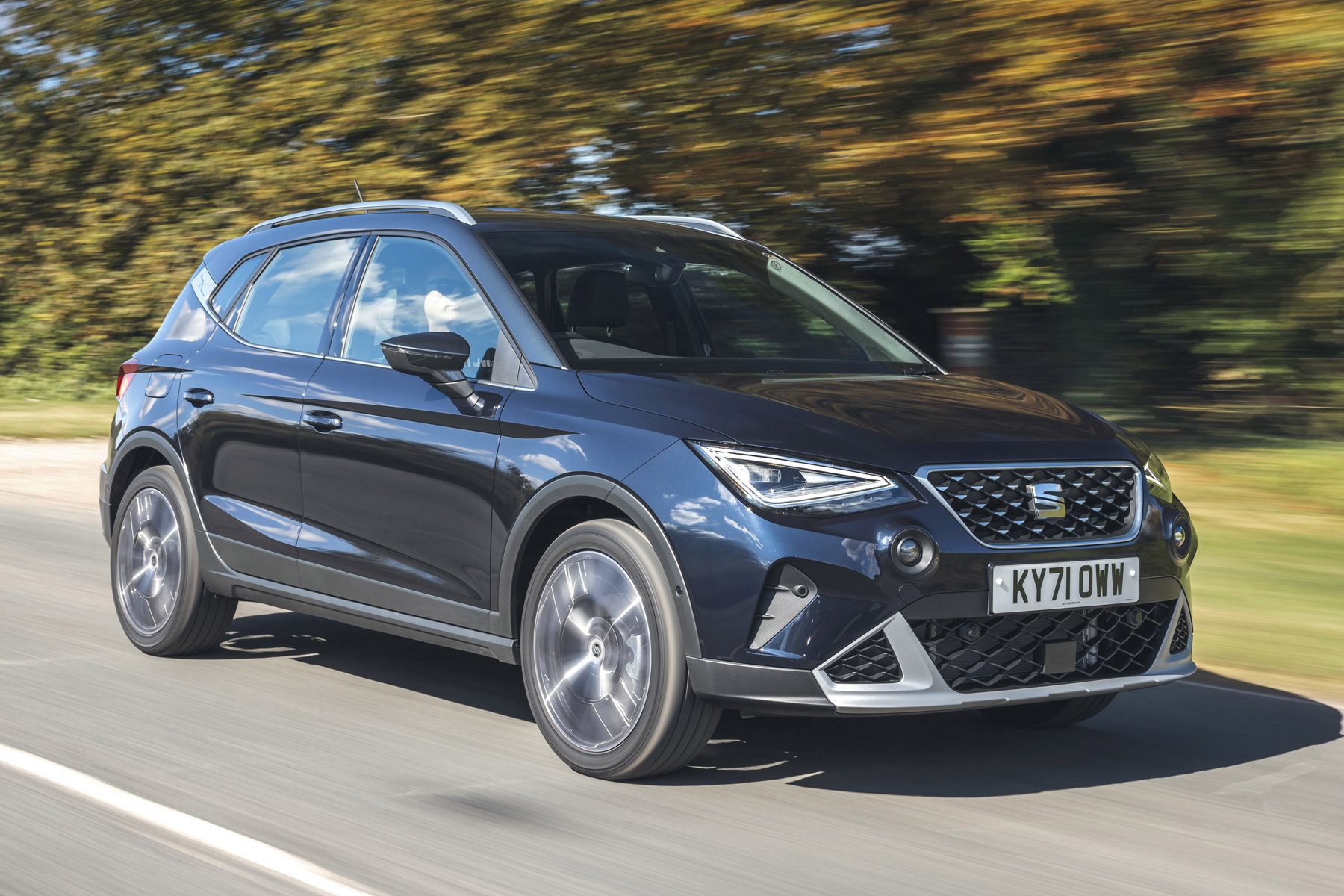 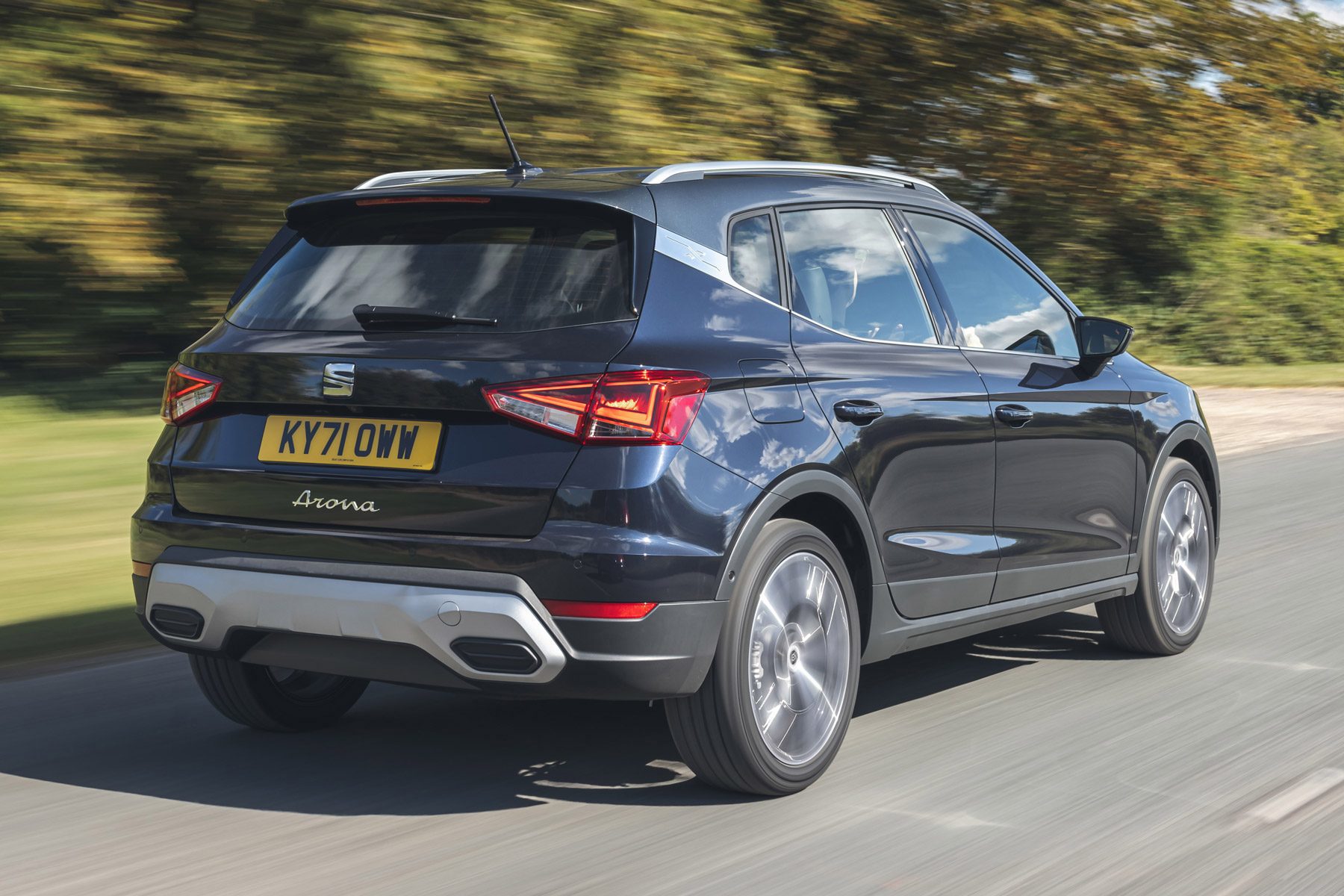 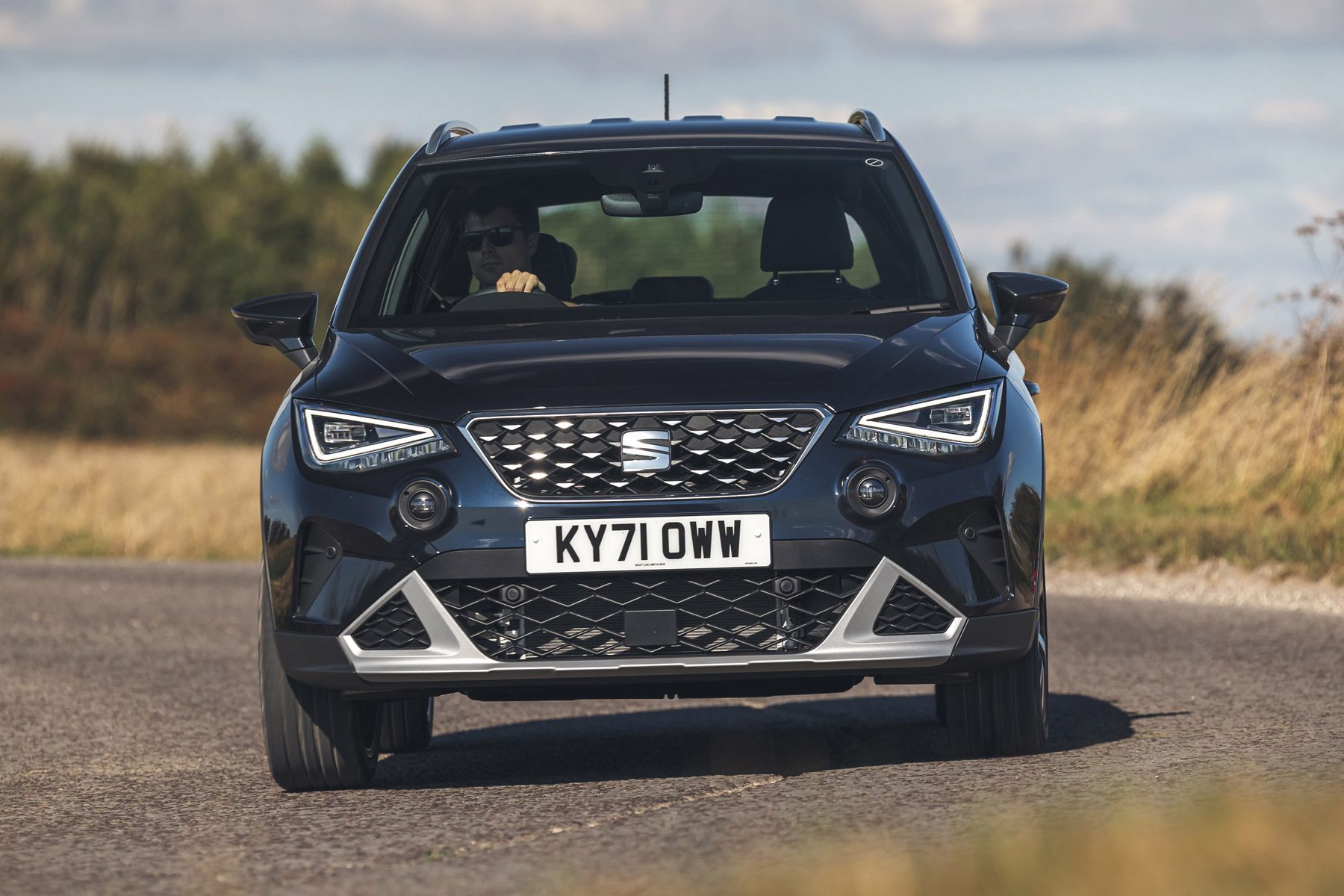 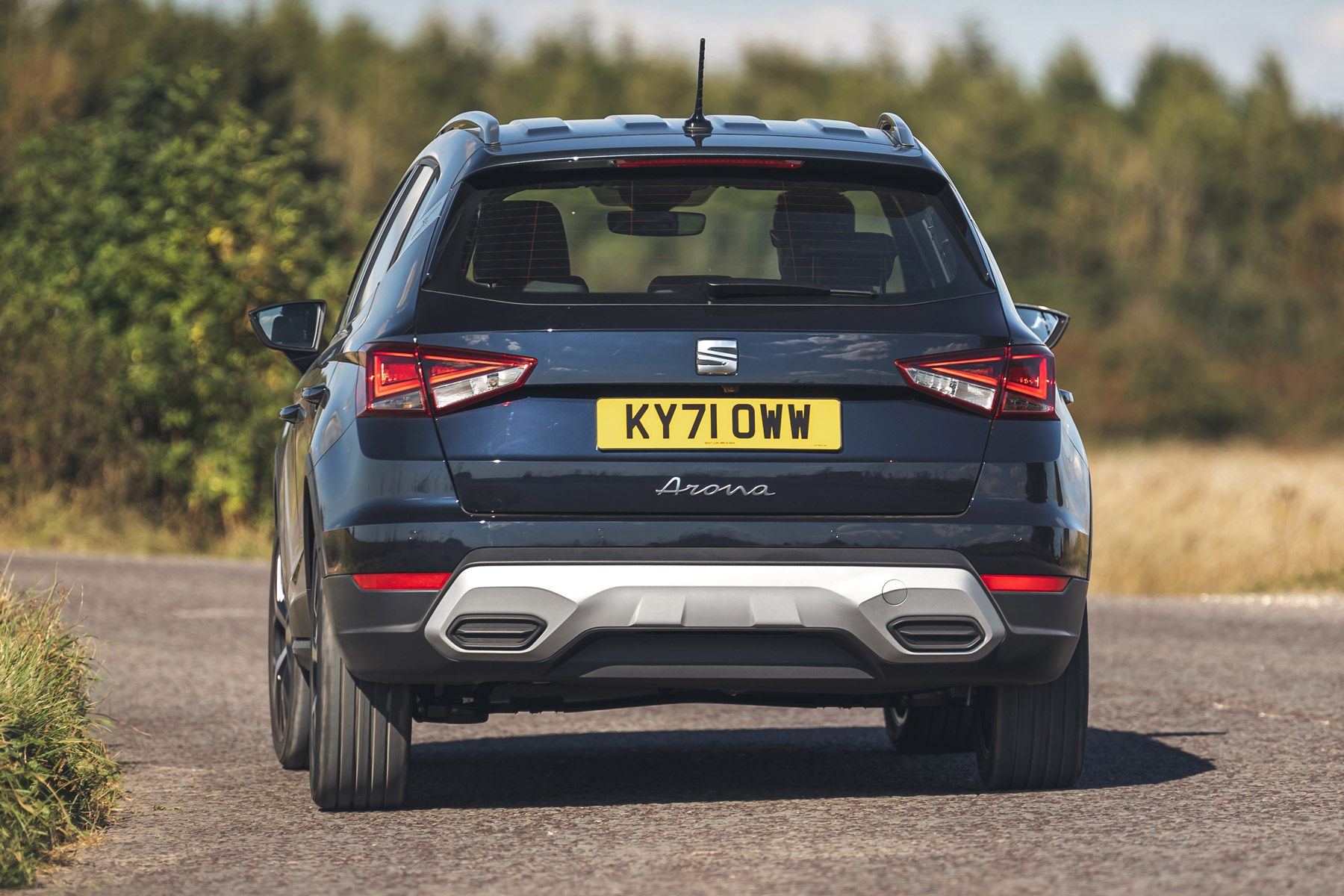 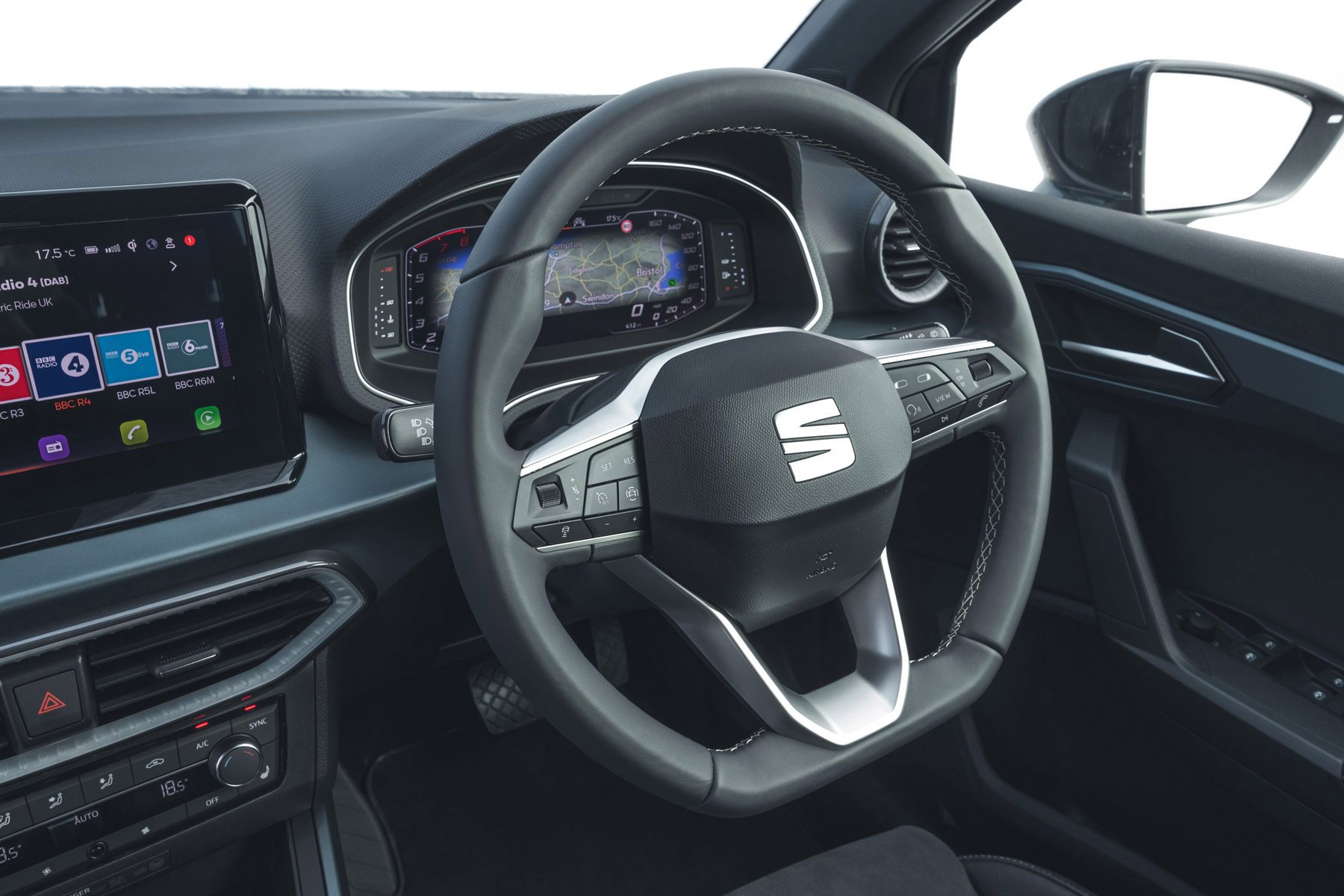 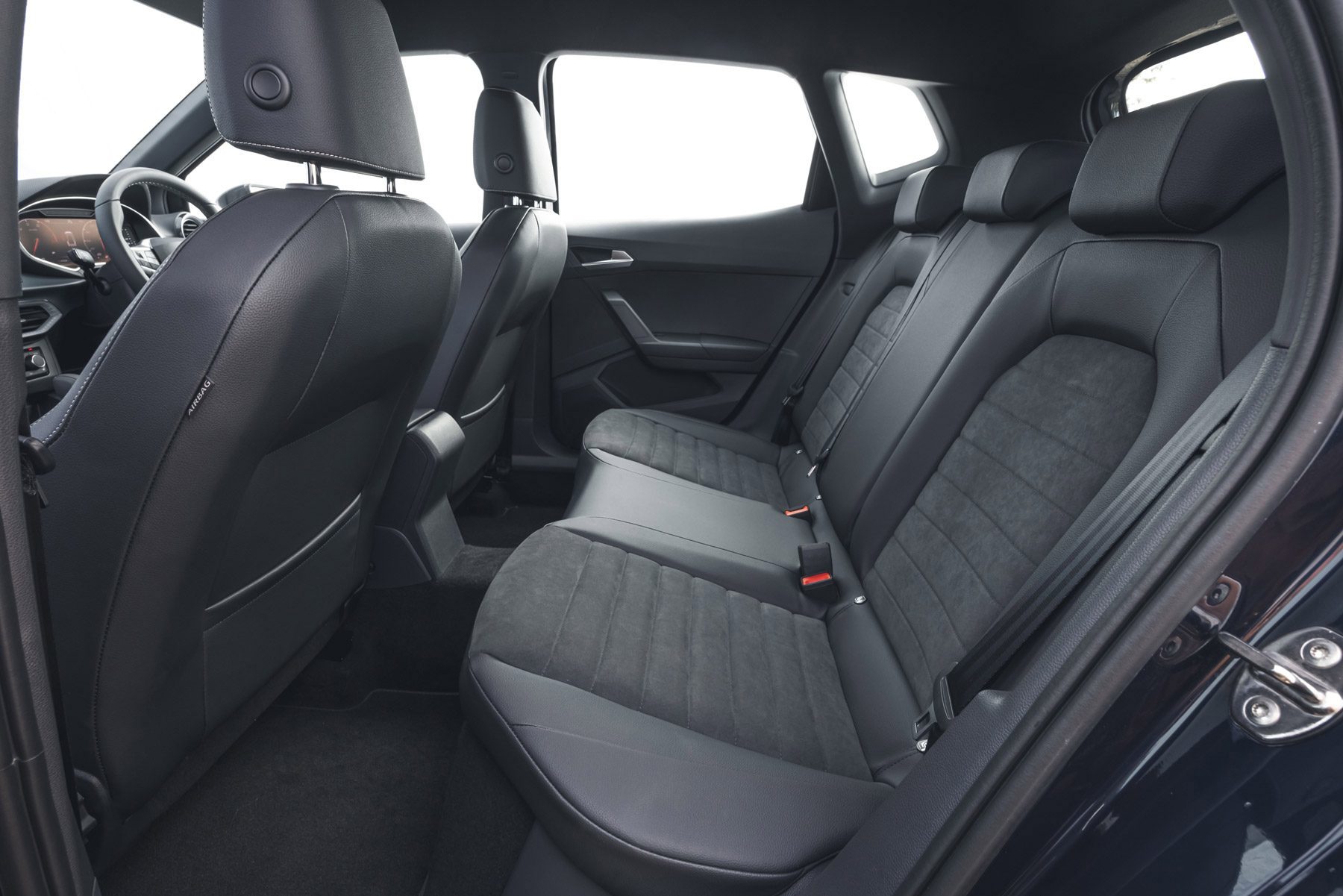 SEAT chose to expand its SUV range with the small family Arona model and it took many of its cue from the larger Ateca. As well as an obvious family styling similarity that you would expect, the Arona also follows the Ateca’s lead when it comes to the way it drives.

Where many small SUVs can feel too tall for their footprint, the Arona has a supple suspension set-up that bats away most lumps and dips in the road surface, so the car feels secure and settled. This makes a big difference to how the Arona appeals to its driver and you are much more comfortable driving down switchback country lanes than in some other cars in this class. Only the Ford Puma and Skoda Kamiq are in the same ballpark as the SEAT in this respect.

There’s a little more road and wind noise to be heard inside the Arona than its key rivals, but there’s nothing to complain about when it comes to the turbocharged petrol engine line-up. There’s a pair of 1.0 TSI engines and a more powerful 1.5, though the stronger 1.0-litre unit makes a strong case for not bothering with the bigger engine. IF you do choose the 1.5, you are limited to the seven-speed DSG dual-clutch gearbox, where the 110hp 1.0 is available with manual or auto transmissions. The 95hp 1.0-litre engine is only offered with the manual ’box.

As with other SEATs, there’s a broad range of trims to pick from, which gives buyers plenty of choice when it comes to price and specification. SEAT provides ample kit with even the base version, so the Arona doesn’t leave owners feeling short-changed.

Nor will they have any sense the Arona has been scaled back in space for its driver and front passenger. The driving environment is very comfortable, though rear seat space is at more of a premium.

SEAT updated the Arona in 2021 and there was a stepped improvement in the quality of the fit and finish in the cabin. This was a very welcome upgrade, though the Arona is still not quite on a par with its cousins, the Skoda Kamiq or Audi Q2, when it comes to overall quality. Even so, the Arona comes with a dash that looks the part thanks to its clear dash display, which is upgraded to a Digital Cockpit in the high-spec FR Sport and Xperience Lux models.

The SE model has an 8.25-inch infotainment screen as standard, while other trims levels gain a larger 9.2-inch touchscreen that comes with satellite navigation and some connected services such as live traffic updates. With the screen placed high in the centre of the dash, it’s easier to reach and use than the one in the SEAT Ateca, and it comes with Apple CarPlay and Android for simple, wireless connection to your smartphone and apps. Larger on-screen icons than in the Ateca make the Arona’s system a whole lot clearer to use on the move.

Beneath the infotainment screen lie the physical control buttons for the air conditioning. It’s good to see SEAT sticking to this arrangement rather than operating them through the touchscreen. It is far easier to turn a dial as you drive to change temperature or fan speed or direction of the air flow than it is to scroll through various menus like you do in a Peugeot or Citroen.

The remainder of the driver’s environment is simple, stylish and comfortable. The seat has height adjustment as standard in all models of Arona, and the steering wheel moves for angle and depth to tailor the driving position to anyone. What you will notice, though, is the Arona’s driver sits lower in the car compared to those in the Skoda Kamiq or Volkswagen T-Cross. For some, this might defeat the purpose of choosing and SUV, while for others it adds to the notion the SEAT is a car with keen drivers in mind.

Whichever camp you fall into, the Arona is comfortable and its driver’s seat offers good support on longer drives. It’s also easy to judge the car’s front corners when parking or moving through densely packed streets. All but the base SE model have rear parking sensors as standard, which are definitely needed to avoid the risk of bumping the back end of the SEAT due to its high waist line limiting rear vision as you reverse.

Staying at the back of the car, the boot of the Arona is well shaped and practical, if not as large as some in the class. It can handle a few suitcases, but there isn’t a sliding rear bench or any clever back seat divisions as there is in the Honda HR-V. However, the rear seats are split 60/40 and tumble to leave a long load floor.

It says a great deal about the SEAT Arona that it comes second only to the Ford Puma as a fun car to drive. The compact dimensions of the Spaniard get it off to a good start as a means of dealing with packed city streets or narrow country lanes. You feel it has more room to manoeuvre than larger SUVs, though this sensation would be further enhanced if the driver sat a little higher up in the SEAT.

Even so, good forward and side vision for the driver allow for easy progress, and the Arona is unchallenging to park in tight bays. The steering has good assistance at lower speeds while retaining decent feel as the pace picks up. The same is true for the handling, which enjoys an agility and precision that few of its competitors can hold a candle too. You might not be a sporty driver, but this ability to deal with corners and changes of direction without becoming ruffled also means the Arona is able to steer around and away from hazards while keeping its driver in full control. SEAT also fits plenty of standard safety tech to add to this and every Arona comes with Emergency Brake Assist, fatigue warning, and Hill Hold Control to make hill starts easier.

All drivers will appreciate the Arona’s supple suspension set-up that gives the impression of it being a larger car than it is. In town or on the motorway, or on grazed country routes, the SEAT makes light work of passing over these surfaces with little interruption to the cabin’s harmony. This is underscored by refinement that is way above the class average, with minimal engine, wind and road noise to heard inside.

SEAT no longer offers the Arona with a diesel engine, so you have a straightforward choice between two 1.0-litre TSI turbo petrols and the 1.5 TSI. The 1.0-litres come in 95- and 110hp forms, and it’s the more powerful of this pair that makes the most sense in the Arona. There’s plenty of pep there for accelerating away from the traffic lights or getting out of tricky side junctions, and it’s happy to cruise along in silence on the motorway. The 110hp engine is also the only one in the Arona line-up with a choice of six-speed manual or seven-speed automatic gearboxes. The less potent 95hp motor only comes with the manual, while the 150hp 1.5 is limited to the DSG twin-clutch auto.

None of them is offered with four-wheel drive, but the FR models come with the Drive Profile modes as standard. This offers the driver a choice of Normal, Eco, Sport or Individual settings to tailor the car’s steering and throttle response, and how the DSG gearbox reacts if fitted. The DSG gearbox is smooth and fuss-free to use, but it can be a little jerky as the Arona pulls away from a standstill.

Value for money: how much does a 2018 SEAT Arona cost to buy and run?

High mileage used SEAT Aronas can be bought for less than £10,000, but a four-year old car with average mileage will start from around £12,000 for an SE Technology trim model. A one-year Arona should be available from £16,000, while haggling a discount of £1500 on a new car from SEAT dealer is perfectly possible.

Keeping a SEAT Arona on the road will offer few worries as combined fuel economy sits between 44.8- and 53.3mpg depending on the engine and trim you choose. The same applies to emissions as the engines produce 121- to 140g/km of carbon dioxide, which means they sit in company car tax bands ranging from 29- to 33%. When it comes to insuring the Arona, it’s also cost-effective thanks to group ratings that start at 9 and run up to group 18.

The SEAT Arona is a very good small SUV and earns it place on any potential buyer’s list thanks to its many virtues. It’s good to drive, refined and comfortable to a point where it queries the need for some drivers to look at larger cars. The engines are willing performers too, though not having a hybrid or EV option does mean the SEAT misses a trick next to newer rivals.

A roomy cabin in the front and decent boot space make the Arona potentially a family’s only car. Rear seat space is not as good as in a Skoda Kamiq, but the SEAT makes up for this with a lengthy list of standard kit. Choosing one of the higher specification models will not break the bank and the Arona’s running costs are very much on a par with its direct rivals’. 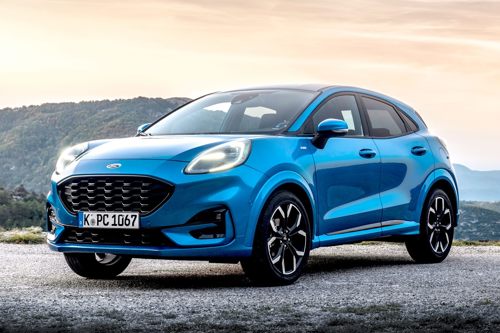 The Ford Puma has got its claws well and truly sunk into the small SUV class as the one to have. Its looks and superb driving manners have made it a favourite with many drivers, and it also does all of the practical stuff very well too thanks to a spacious and well put together cabin. The engines are peppy and, unlike the SEAT Arona, there’s a hybrid option. And the Puma has a handy trick in its boot with the ‘megabox’ that offers a very useful additional 80-litres of covered storage space.

On paper, the Kia Stonic is hard to fault thanks to its keen pricing and equally keen levels of standard equipment. Kia also supplies the car with a very on-trend mild hybrid power set-up that offers low running costs. It’s not the most engaging small SUV to drive, but it’s comfortable and happy to potter around town or on the motorway. A firm ride is less impressive, but a seven-year warranty will put many drivers’ minds at rest when it comes to signing a deal on the Stonic. 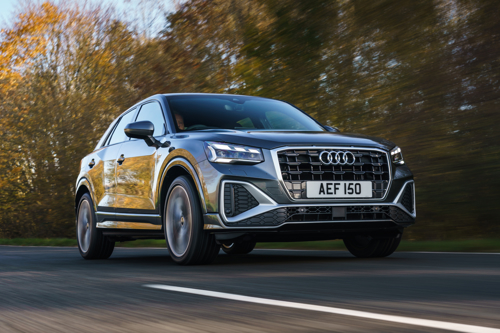 A relative of the SEAT Arona in the wider Volkswagen Group scheme of things, the Audi Q2 is still a very different take on the small SUV. It places style above all else thanks to its coupe-esque looks. There’s also a host of personalisation options with the Q2 to make it your own, though beware that going mad with the options will also ramp up the cost considerably. As it’s an Audi, the Q2 feels solidly built, but rear seat space is very limited and it's far from the most refined car in this class when travelling at higher speeds.