The SEAT Ateca is great to drive and spacious, but it has a firm ride and no hybrid option. 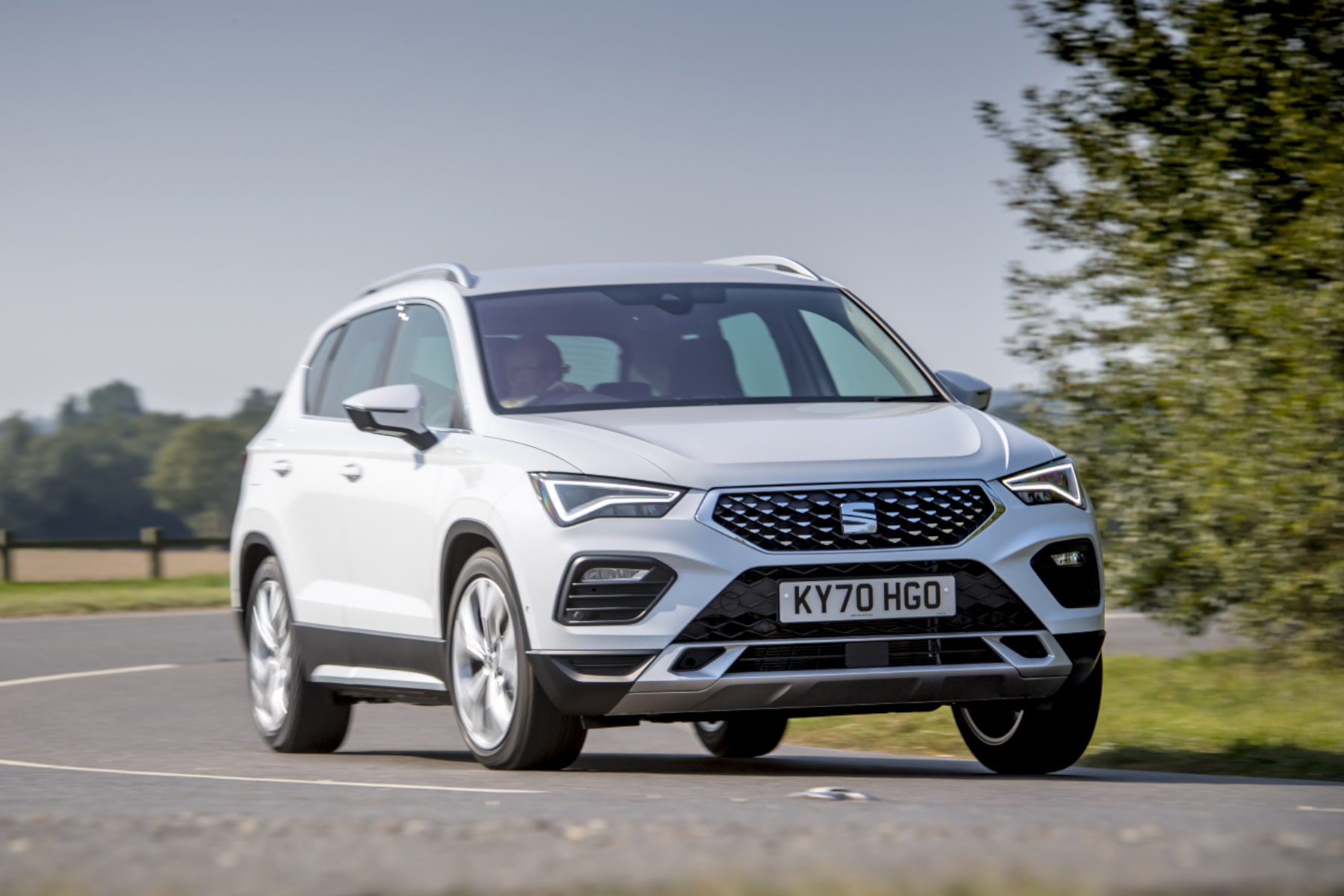 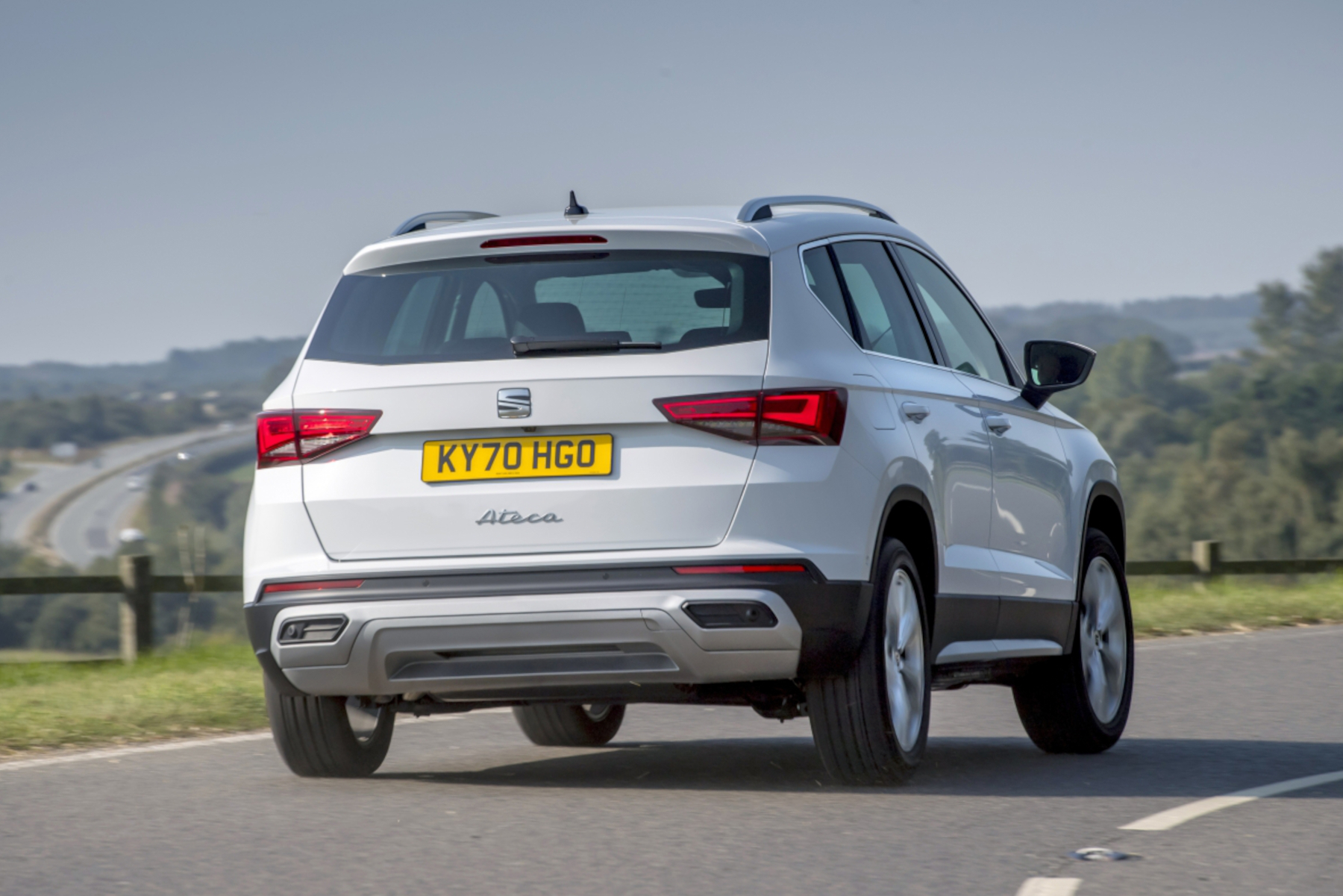 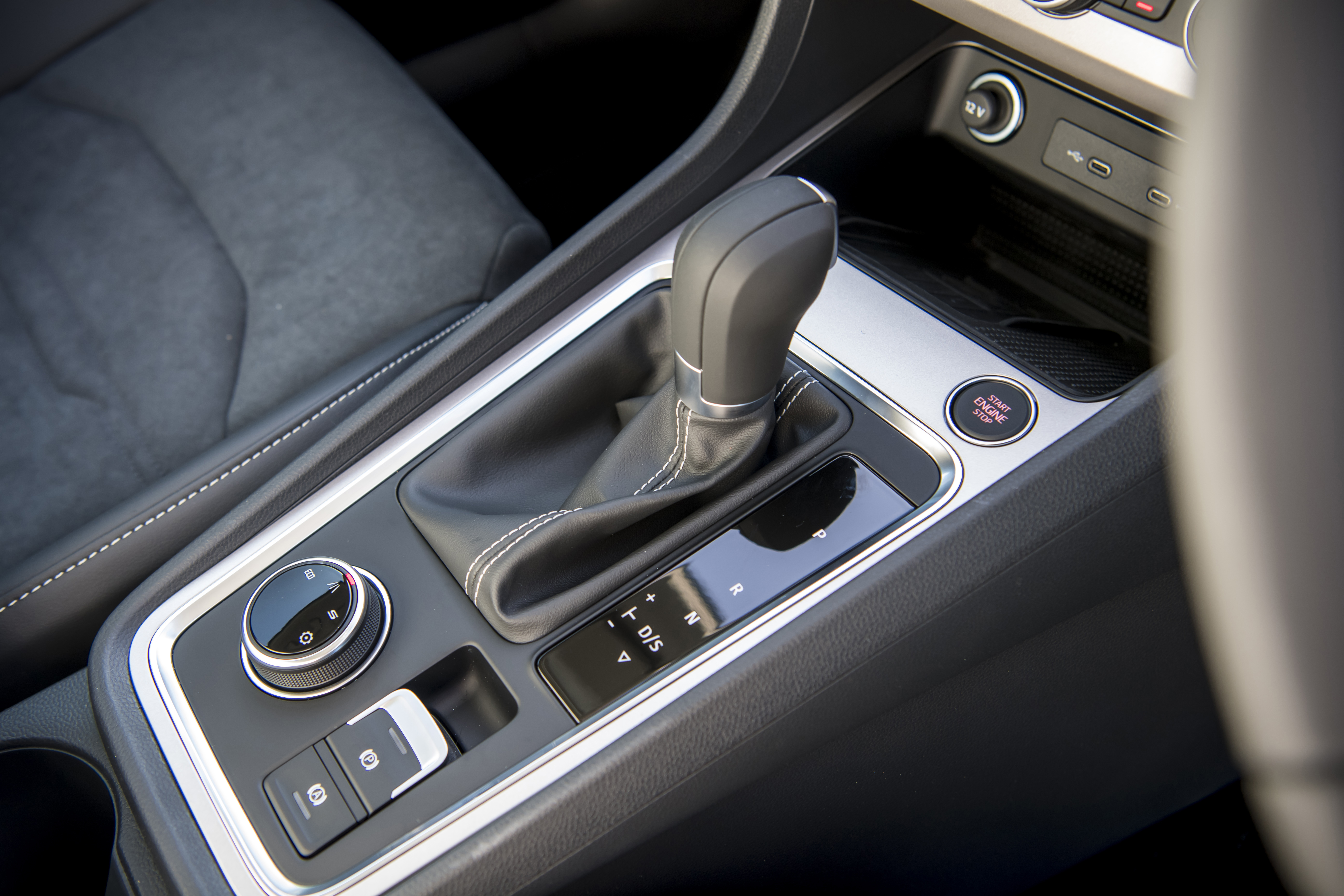 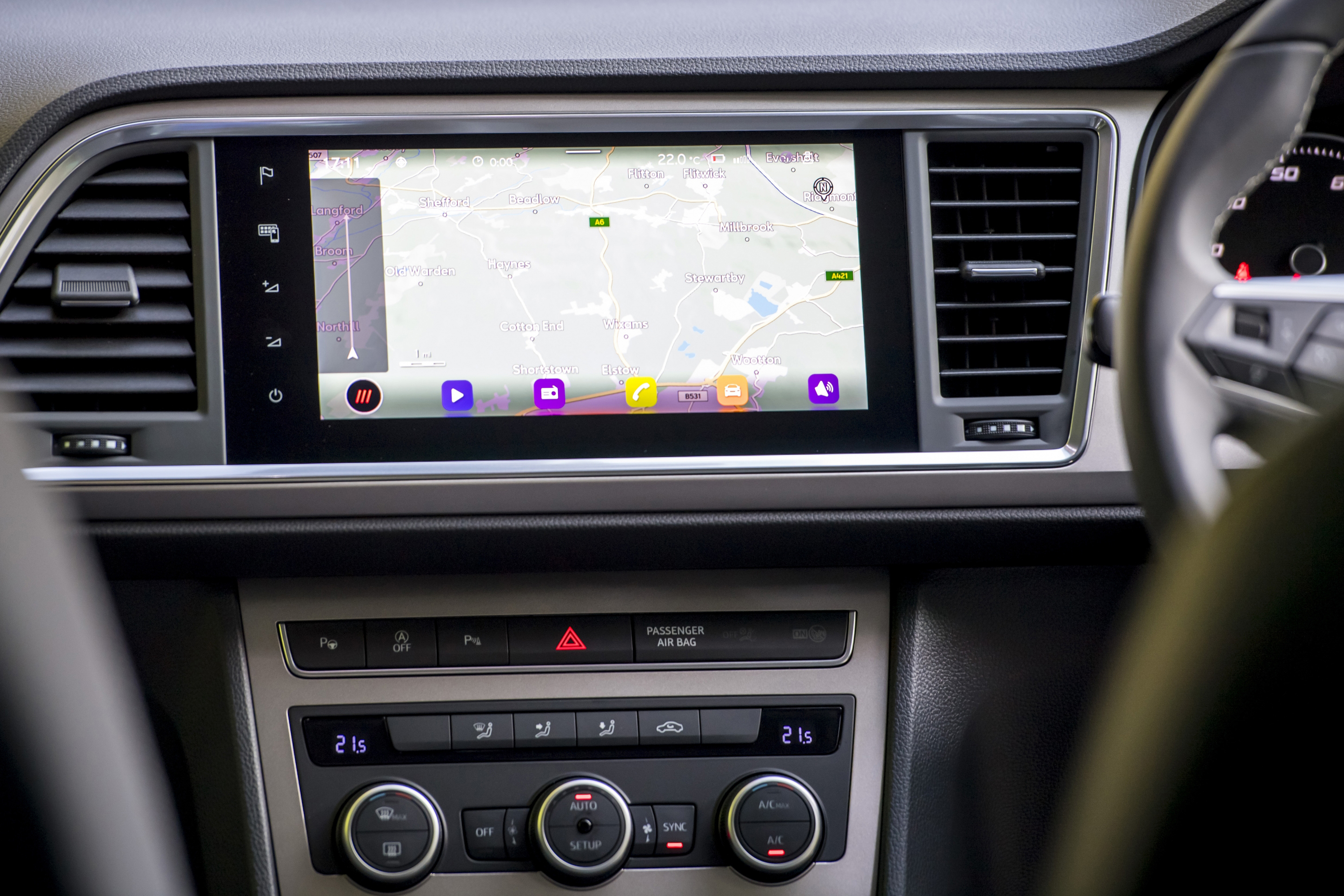 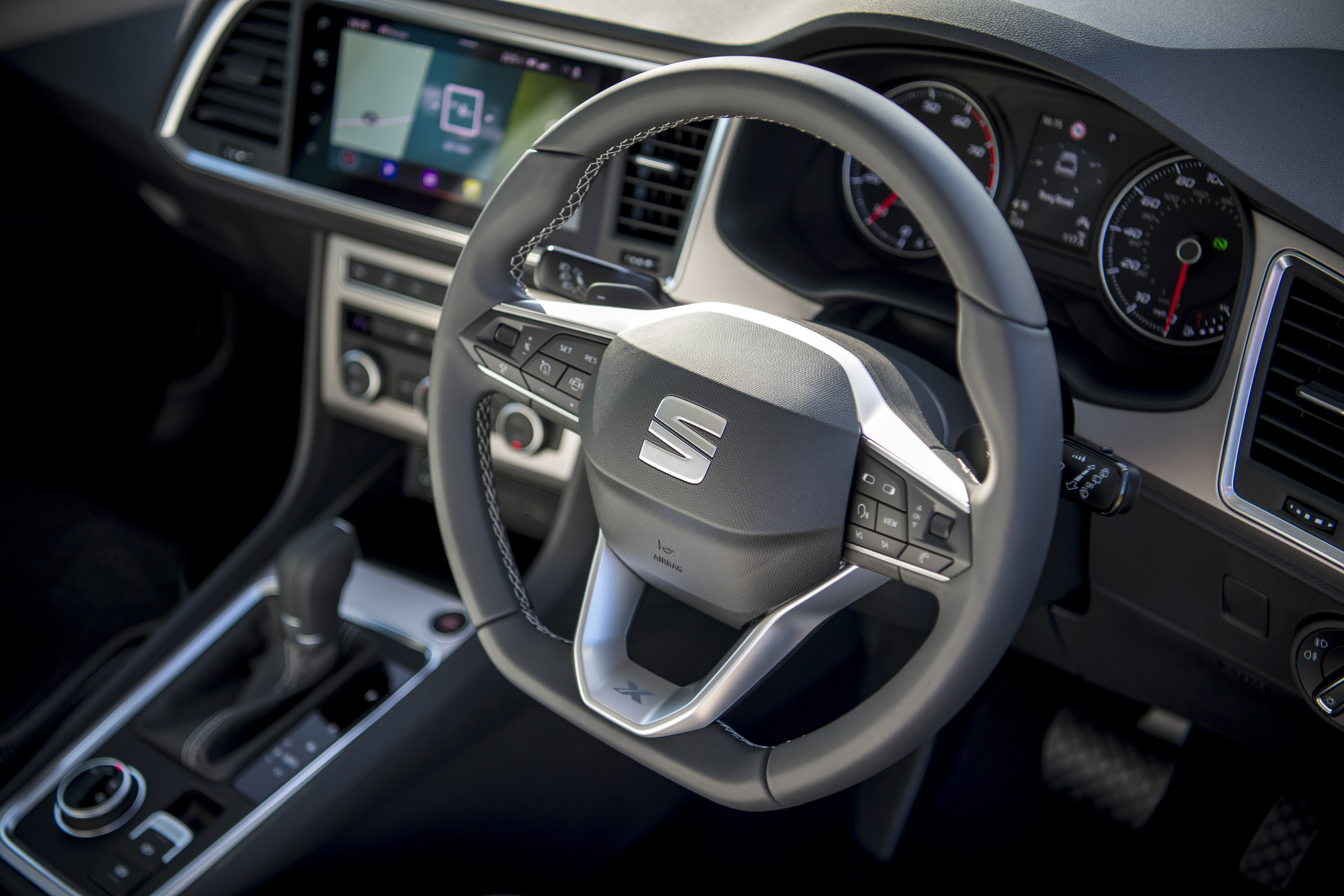 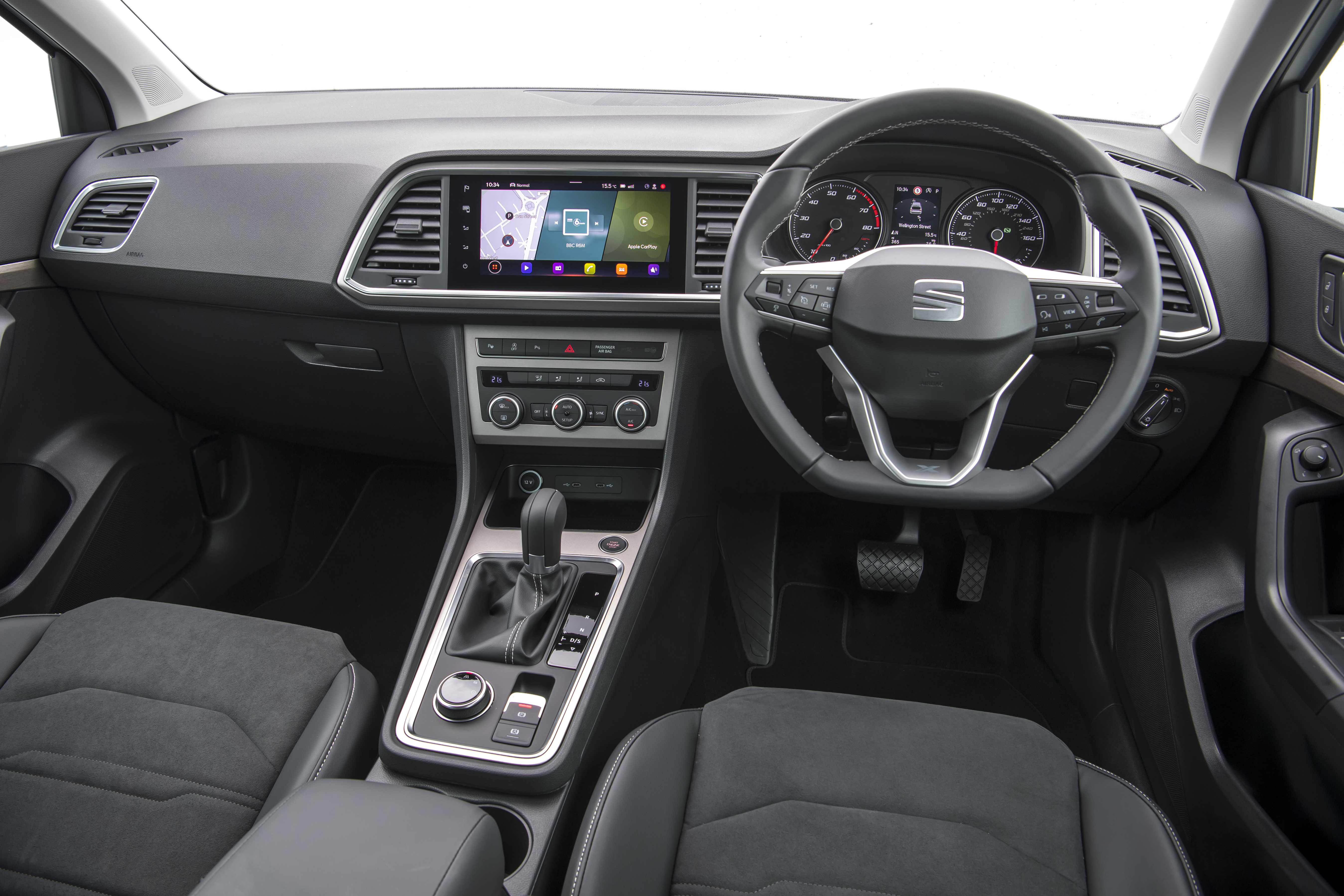 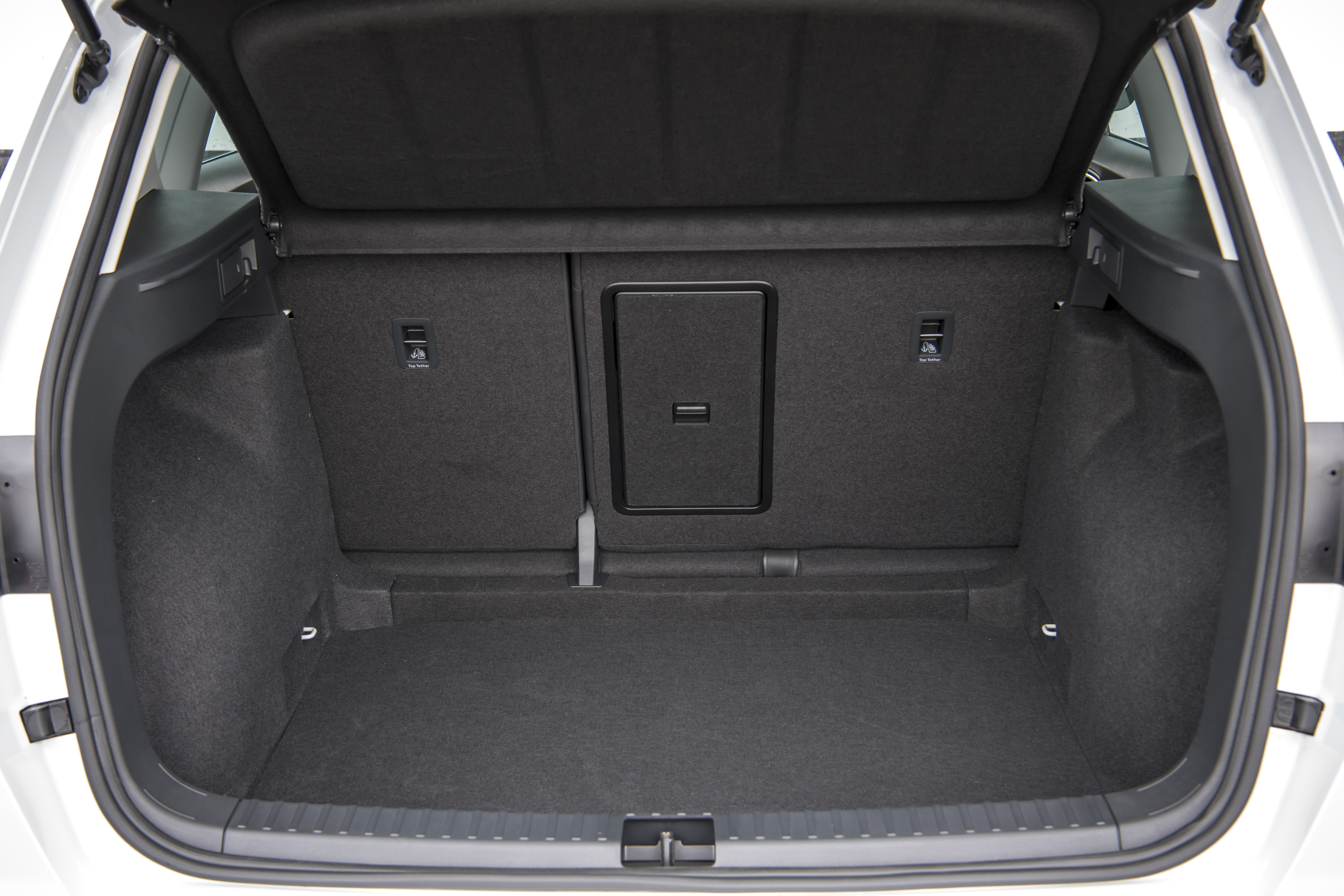 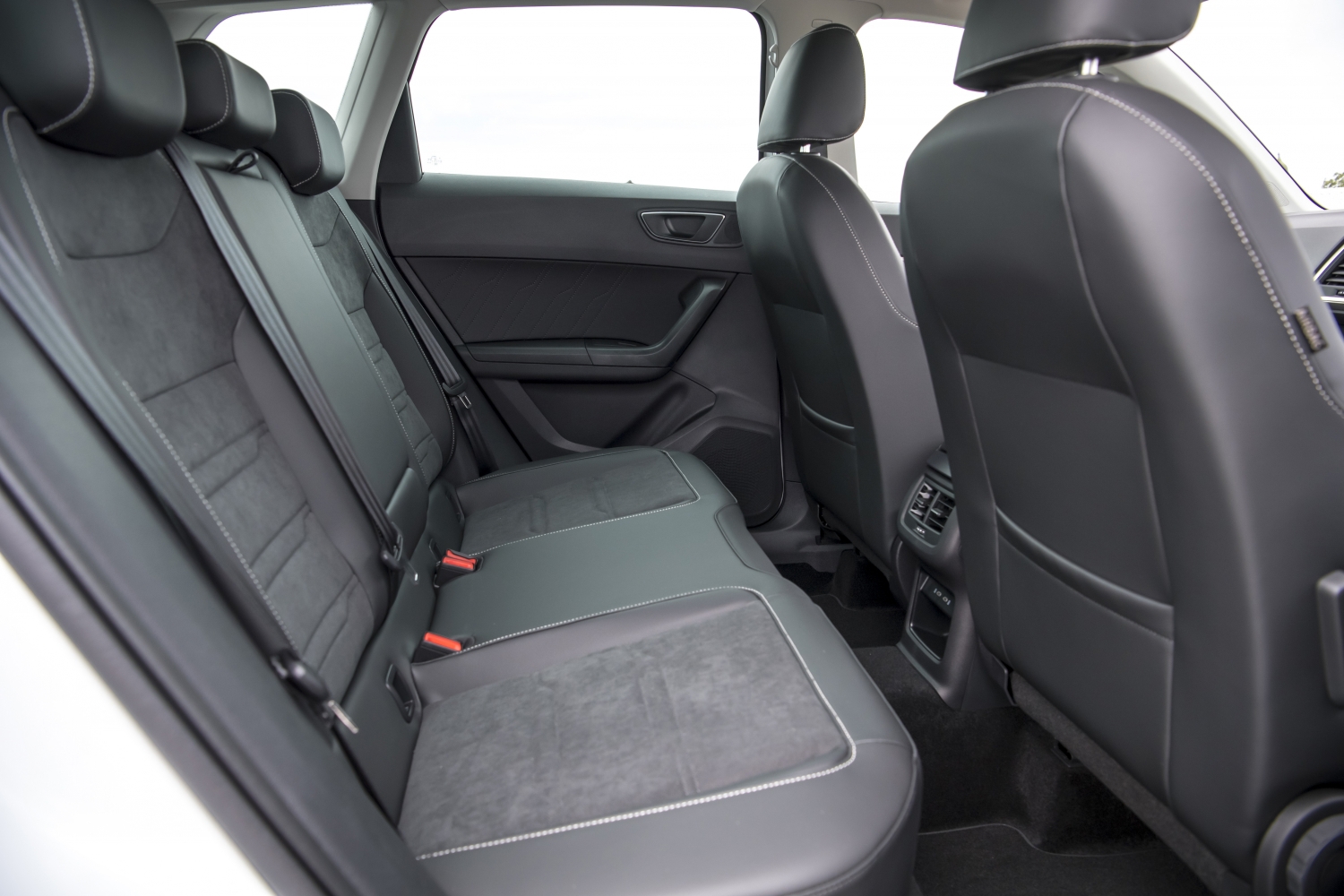 The Ateca was SEAT’s first proper SUV and it set a high bar from the moment it was launched in 2016. A gentle update in 2020 has kept the Ateca well and truly in the hunt among the best in class alongside the likes of the Skoda Karoq and Volkswagen Tiguan that it shares its mechanical base with, as well as the Nissan Qashqai and Peugeot 3008.

Yes, the Ateca may be a little more seasoned in the sales charts than some of its competitors, but the traits that made it so good at launch still hold true. The Spaniard remains one of the best cars in the sector to drive both for fun and as an everyday family car. On twisty roads, its well judged suspension set-up lets you make good progress without having to worry about excessive lean in corners or the car feeling as it will tip over. Nor does it leave its occupants green at the gills, though some might find the ride quality a little on the firm side.

Where the Ateca does show its age is there’s no hybrid or EV option in the range. This will limit its appeal to business drivers, but there is a good spread of petrol and diesel engines, manual or automatic gearboxes, and the option of four-wheel drive should you need its added on-road traction. The SEAT is not an off-roader in the way a Dacia Duster is, but it does offer enough ability to cope with a farm track and there’s good all-round vision for the driver to make the Ateca easy to pilot in town or on the motorway.

Another solid reason to consider the Ateca is the amount of space it offers in its cabin and boot. It’s among the most generous in the class. The dash might be looking a little dated now, but SEAT offers lots of standard equipment in all models.

There is a great deal to like about the interior of the SEAT Ateca. For starters, it offers a lot of room for all of its occupants, whether they are sitting in the front or rear seats. Focusing on the front of the cabin, the driver enjoys a very comfortable position, helped by standard height adjustment and lumbar support on all models. The steering wheel moves for reach and depth, so fine tuning the driving position in this SUV is easy no matter what height or shape you are.

There’s excellent all-round vision for the driver and all Atecas come with front and rear parking sensors, as well as self-parking assistance. IT means slotting the SEAT into tighter car park spots is simple and worry-free.

The dash in the Ateca is beginning to betray the age of this model compared to many of its key rivals. However, this is not all bad news. Unlike some SUVs in this segment that force you to operate almost every function through the infotainment touchscreen, the Ateca has individual physical buttons for the heating and ventilation. It makes adjusting the temperature or fan speed much simpler while driving and far less distracting.

The infotainment touchscreen is an 8.25-inch display in the entry-level SE model, while every other Ateca has a larger 9.2-inch touchscreen. Either way, there are shortcut buttons arranged on either side of the screen to take you quickly to the desired menu. Using the screen itself requires a little dexterity as the icons on the display are quite small. The response to your finger’s touch is quick enough, and you can pair your smartphone using Apple CarPlay or Android Auto. There’s also wireless phone charging as standard with all Ateca models.

With the top spec Xperience Lux model, you also get the Digital Cockpit dash display, which offers a configurable screen in place of the instrument gauges. This works well with the sat-nav as you don’t have to glance across and down to the centre touchscreen to view the map.

Sit in the back of the SEAT Ateca and you’ll find it has more room than most of its rivals for passengers’ feet, knees, heads and shoulders. Two adults will find it very comfortable, but a third might struggle due to the high centre tunnel. For kids, this isn’t an issue, and the rear doors open very wide to help when fitting a child seat using the Isofix mounts on the two outer pews.

None of this space comes at the expense of luggage capacity as the Ateca can carry up to 510-litres of cargo with the rear seats in use. That drops to 485-litres in the four-wheel drive model, but it still a very useful amount of space. The rear seat splits 60/40 and tips down to leave a long, flat load floor for larger items. However, there’s no underfloor storage or variable boot floor.

Family SUVs have a big brief to fulfil as their drivers want comfort and refinement, yet they don’t want a tall car that swells around in corners like a dinghy in a storm. Few cars in this class pull off the balancing act of blending enjoyment with everyday usability as well as the SEAT Ateca.

At lower speeds, you will notice the Ateca has a slightly firmer ride than a Nissan Qashqai or Peugeot 3008. It’s not harsh or jiggly, you just notice speed bumps a little more, especially if you choose an Ateca trim version with larger alloy wheels. The pay-off, however, is superb control at higher speeds when its softer-set rivals begin to feel a touch wallowy in corners or crosswinds. This stability makes the SEAT a very sound choice for long distance or regular motorway driving jaunts.

This quality also endows the Ateca with better handling along back lanes than most of its rivals, with only the Ford Kuga or Skoda Karoq really being in the same league. It’s further helped by steering that offers good feel and precision, which aids the SEAT to avoid feeling like a big, bulky SUV in the way some cars in this sector can. SEAT has made a good job of keeping noise out of the Ateca’s cabin, too. Road, wind and engine noises are all pleasantly muted, even at higher speeds, which helps stave of fatigue for the driver and passengers.

The engine line-up starts with a 1.0-litre TSI turbo petrol that has 110hp. It’s fine around town and, once up to speed on the motorway, does a decent job, but the 1.5 TSI with 150hp is the more obvious choice in the Ateca. This large engine is offered with a six-speed manual gearbox or seven-speed dual-clutch automatic, where the 1.0-litre is only available with the manual ’box. A 2.0-litre TSI motor serves up 190hp and is only offered with the DSG gearbox and 4Drive four-wheel drive. While the DSG gearbox makes life easier around town, it's not the smoothest auto when it comes to shifting gears at lower speeds, so the manual transmission models are preferable for most drivers.

The other engine options are all based on the 2.0-litre TDI turbodiesel. Depending on trim level, you can pick between 115- or 150hp options. The 150hp turbodiesel is the all-round best bet and you can select between either the manual or automatic transmissions. There’s also a four-wheel drive option with the more powerful diesel that comes with the DSG auto as standard. There’s no hybrid or EV model in the Ateca’s range, which is a sign of this car’s longer life compared to many rivals.

Value for money: how much does a 2016 SEAT Ateca cost to buy and run?

An Ateca FR has rear privacy glass, front sports seats, and Dinamica suede-style upholstery. You also get automatic headlights and wipers, plus SEAT’s Drive Profile with selectable driving modes for Normal, Sport, Eco, and Individual. Upgrade to the FR Sport and you enjoy 19-inch alloy wheels, electric driver’s seat adjustment, leather upholstery with heated front seats, and the Digital Cockpit dash display. An Xperience model trades down to 18-inch wheels, but gains a rear view camera, Safety and Driving pack with adaptive cruise control and Traffic Sign Recognition, and swaps leather for Dinamica upholstery. Or you can go the whole way with the Xperience Lux that has 19-inch wheels, leather trim, powered tailgate, and a top view parking camera.

Running an Ateca is not a threat to your financial security. Carbon dioxide emissions vary between 127- and 182g/km, while combined fuel economy ranges between 35.3- and 58.9mpg. Insurance lies in groups 10 to 24 depending on trim and engine choice, while company car drivers will pay tax based on bands between 30- to 37%.

It’s hard not to like the SEAT Ateca. Whether you simply want a practical, versatile family SUV or fancy something with a dash of style, this Spanish contender has it in abundance. There are plenty of other attractive reasons to have the Ateca on your shortlist as it is one of the best cars in its segment to drive for enjoyment and refinement.

A large cabin means you won’t have to change cars in a hurry as the kids grow, and the boot is big enough to cope with most needs even if it’s not the largest in the class. All trim levels are well fitted out with luxury and safety kit, and upgrading to a higher trim is not the big monetary jump it can be with some of the SEAT’s rivals. Only the slightly dated feel of the dash and no hybrid option hold the Ateca back from being class leader.

The Hyundai Tuscon has made a huge leap to the head of this class in its latest form. Gone are the dull looks, replaced by sharp styling that marks out this SUV. It’s backed up by a keen drive and fine handling, while the cabin is made from exemplary materials and packed with standard kit and tech. Some might the rear seats not as spacious as some in the sector, but there’s a big boot. Hyundai doesn’t offer a diesel in the Tuscon, but you can have a hybrid model. 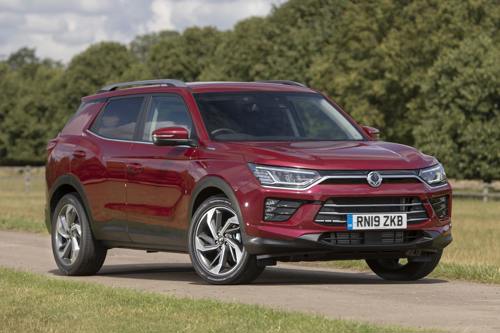 Sneer at the SsangYong Korando at your peril. Some might regard the Korean as a budget offering, and it certainly comes with very keenly pitched pricing, but there’s nothing low-rent about this SUV. It looks the part and the generously equipped interior is one of the more generous with space in this sector, plus you get a large, practical boot too. There’s no hybrid option, but there are petrol and diesel motors, as well as a choice between two- and four-wheel drive versions, and the Korando is decent to drive, though not class-leading.

There’s little can match the Lexus UX for its sleek looks in the family SUV sector, not even the Range Rover Evoque. This forms much of the Lexus’ appeal, along with its superbly made interior that comes with plenty of tech and a fine driving position. However, it’s not the most practical car in this segment as the rear seats and boot space both lag well behind the leaders. Some might find the ride quality too firm, as well, but all models come with some form of electrification or you could opt for the UXe with its 196-mile EV range.