Kia has not held back with the styling of the Sportage, nor how it drives or is equipped. 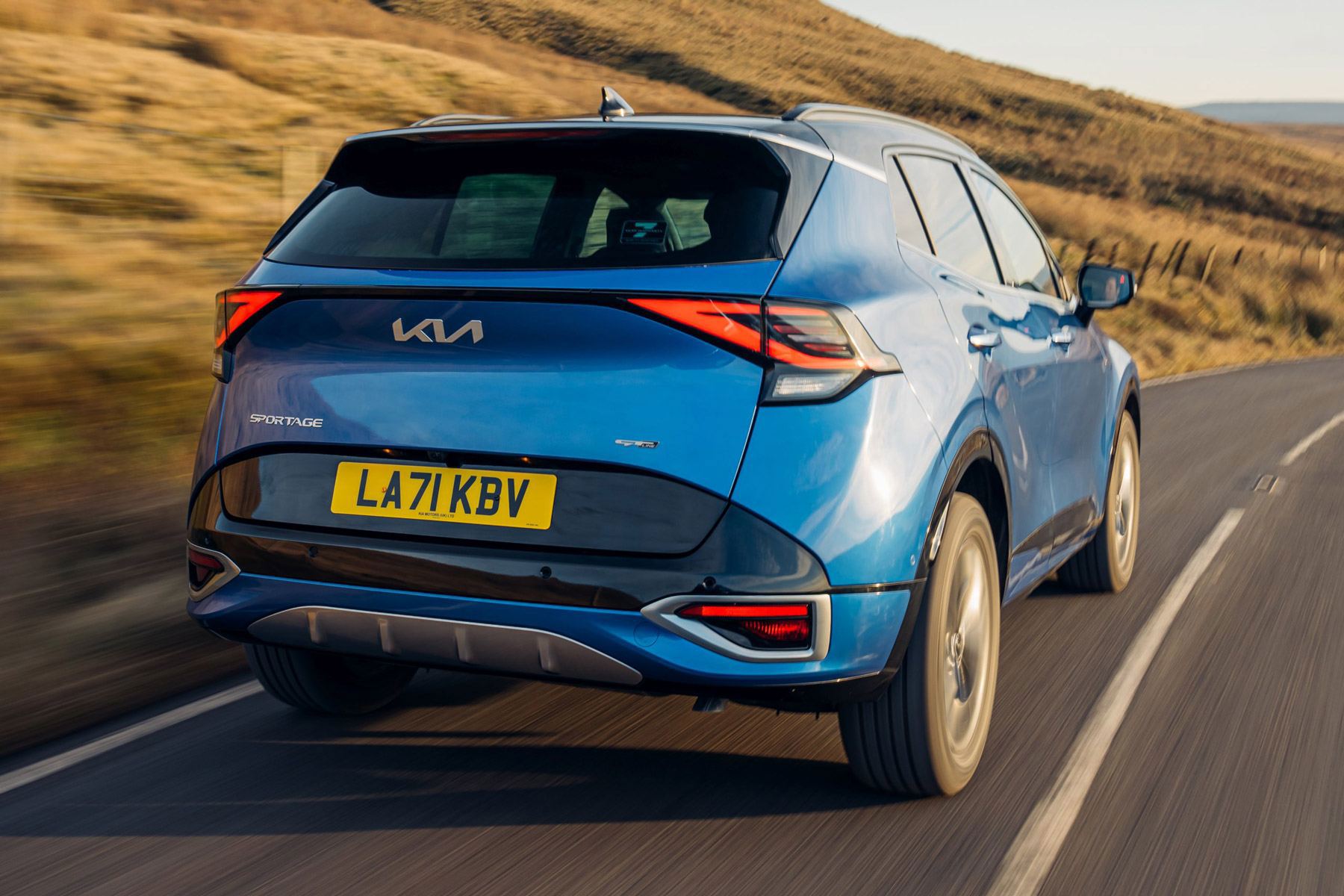 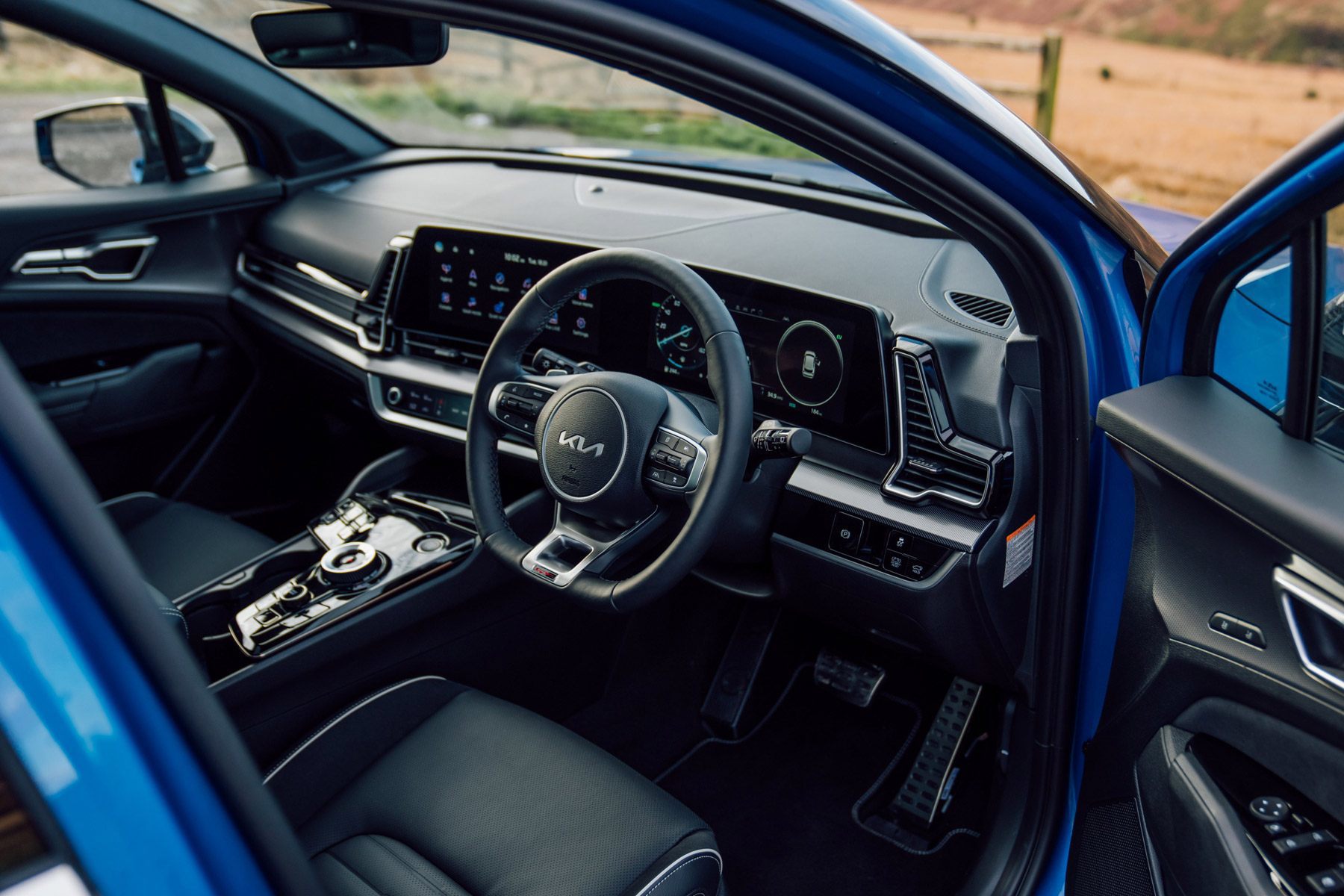 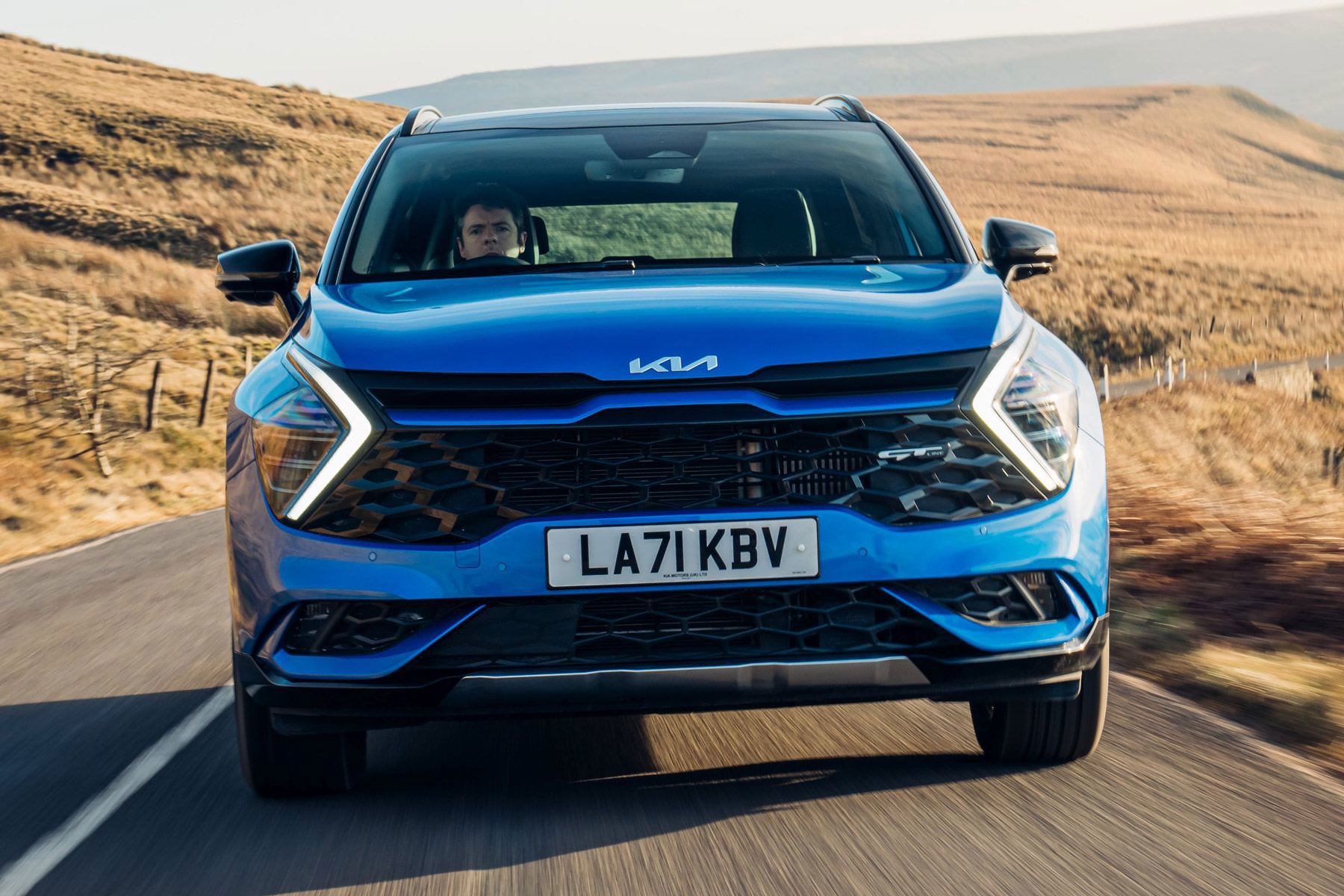 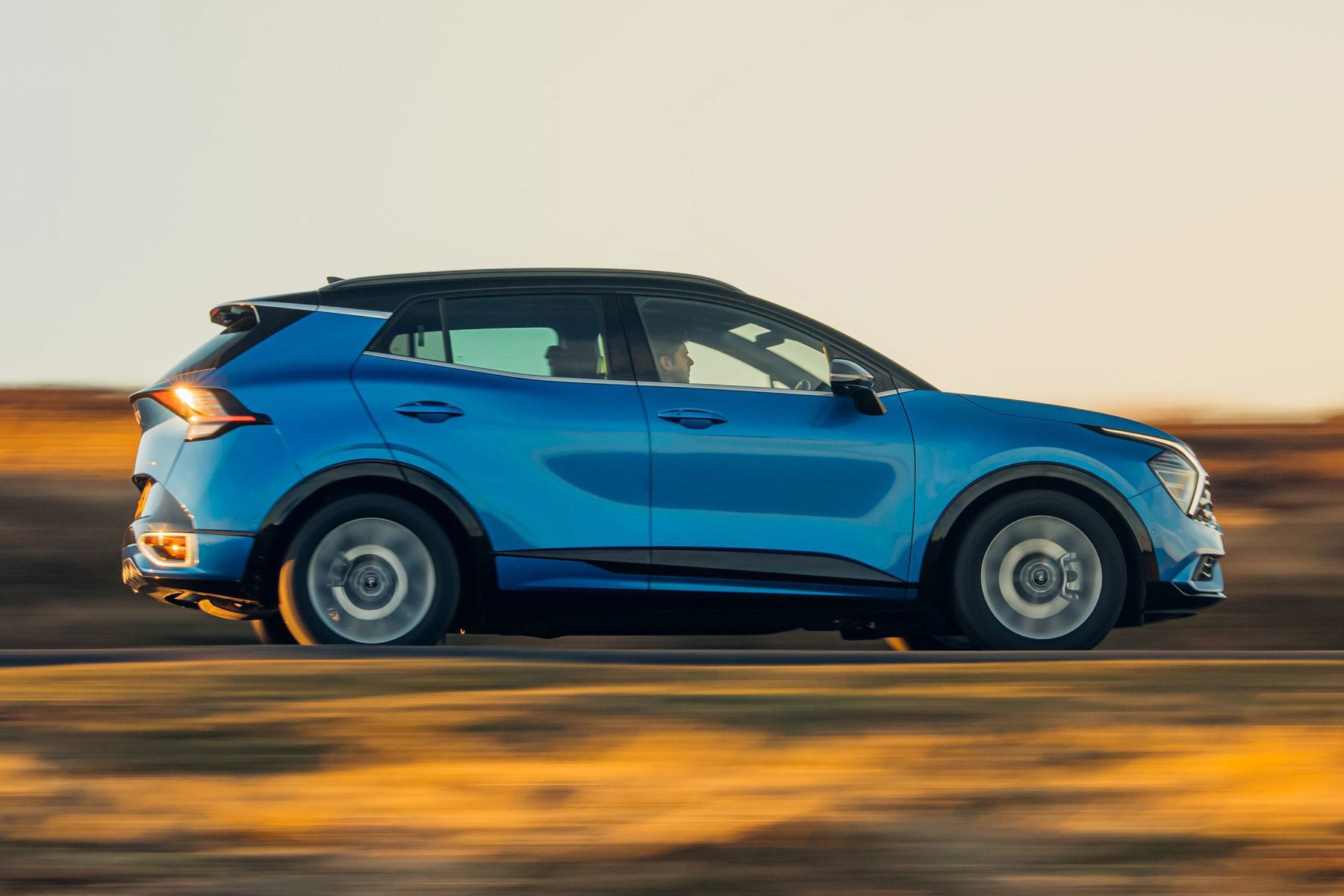 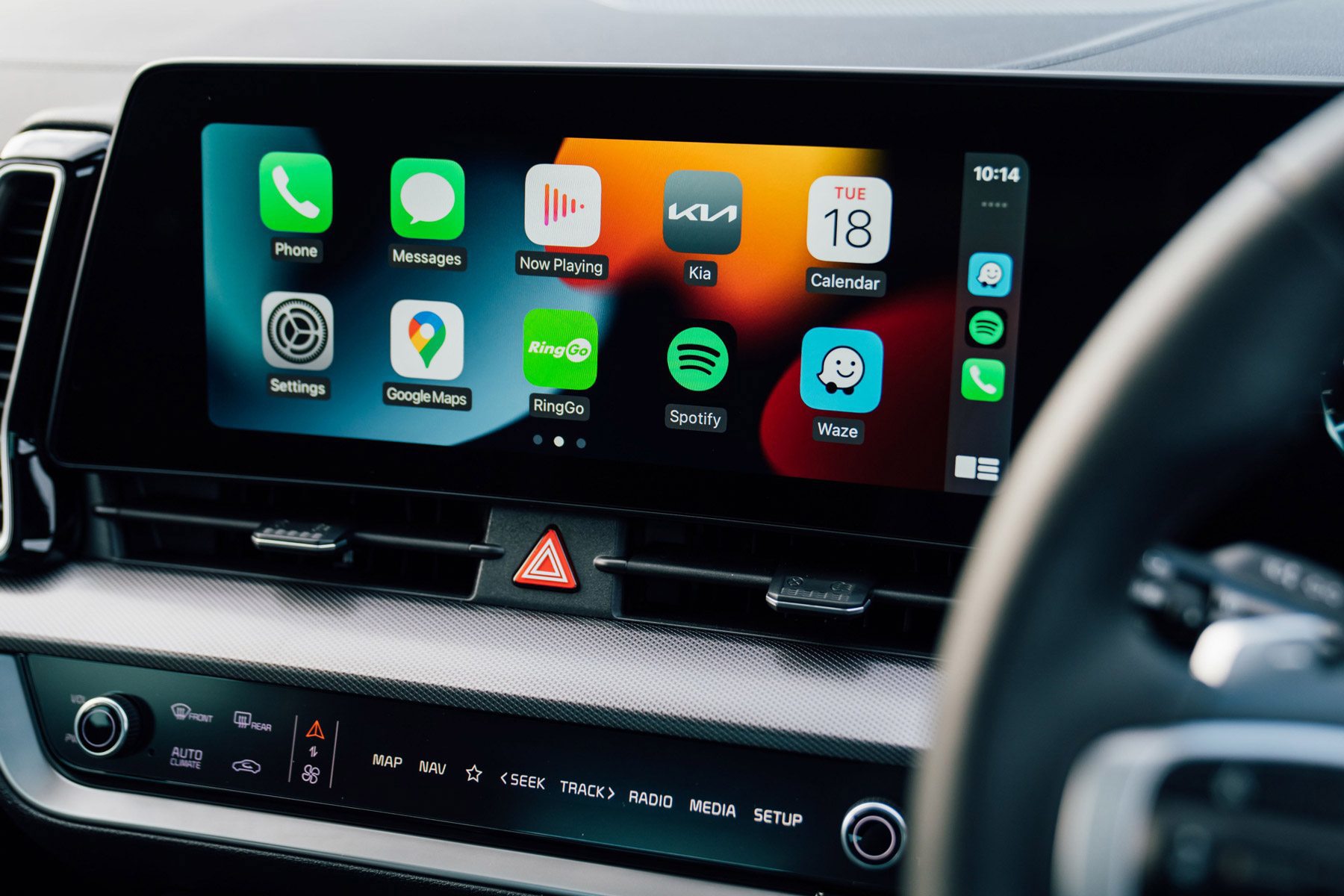 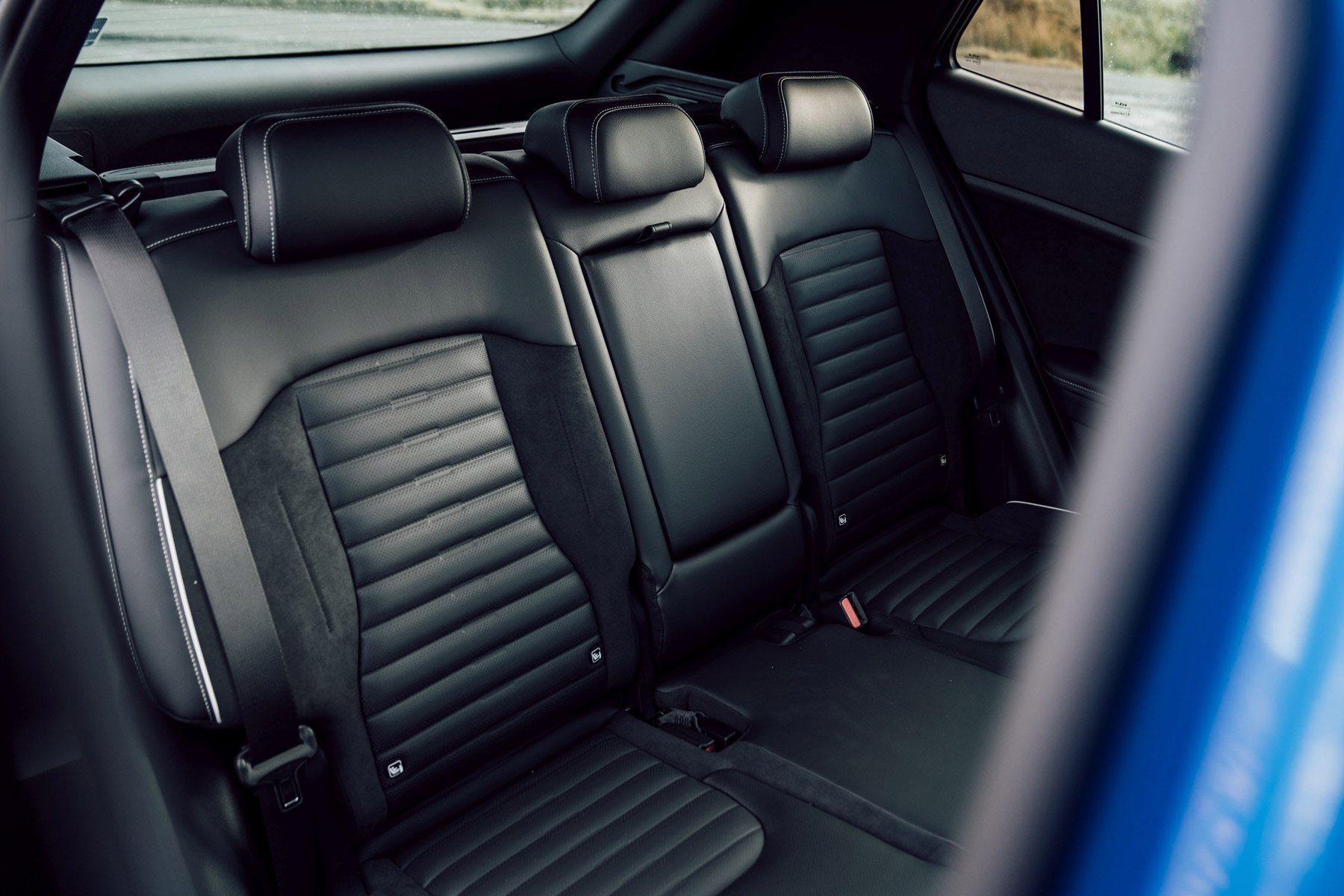 There is nothing shy or retiring about the latest generation of Kia Sportage, and it demonstrates the company’s push to up quality while keeping prices at reasonable and competitive rates. On looks alone, the Sportage stands out in a class where rivals like the Hyundai Tuscon, Nissan Qashqai and Peugeot 3008 are all handsome machines. Yet Kia had outdone them all without compromising the car’s essential practicality.

On the inside, Kia has kept up the sharply styled, high tech approach, with most models featuring a large central infotainment screen. It sweeps across the upper central portion of the dash from the side of the main instrument binnacle to create the sense of one large display. Couple that to the neat line of buttons for the ventilation and a centre console with rotary gear selector for those cars with an automatic gearbox, and you have one of the classiest and appealing cabin ambiences going in this class.

The Kia’s interior is more than just style, too, as it has the substance to back it up in the form of lots of room in the front. Space in the back seats is fine average for the sector, while the boot is one of the biggest in the class. You also get plenty of safety equipment and standard kit in every trim level.

As for engines, Kia has this sorted, as well. You can choose between petrol, diesel, and mild or plug-in hybrid models with a petrol engine. There’s also the option of four-wheel drive if you really need it with the higher spec trims, though this is an unnecessary expense for most as the Sportage is not an off-roader.

One of the most impressive features of the Kia Sportage’s cabin is the large 12.3-inch infotainment touchscreen that is standard on all but the entry-point 2 trim. With the 2, you get an 8-inch display that is still bigger than many of its rivals and it’s simple to use and navigate. With the larger screen in all of the other versions of the Sportage, you’ll find the monitor responds a bit more quickly to the touch of a finger and the graphics are even sharper. The only downside is some of the onscreen icons are just a smidge too small to be easily located as you drive. It’s hard to be critical, however, when it looks so good and is integrated into the dash design far more harmoniously than most infotainment screens.

Kia provides a seven-year subscription to its online services with the new Sportage, so you can access updates to systems such as the sat-nav. It also works with Apple CarPlay and Android Auto, giving access to your smartphone’s apps through the car. While all of this high tech works very well, it’s also good to see Kia using separate buttons for the ventilation, which are just below the touchscreen. However, it can be too easy to change the heating settings unintentionally as you rest a hand on them while using the touchscreen.

The driver is well catered for in the Sportage with space in every direction. There’s also height adjustment for the seat, and the steering wheel moves for depth and angle, so it’s no bother to find the perfect driving position whatever your stature. Kia also offers lots of storage around the front cabin, but the door pockets are quite small.

In the back, space is fine for a couple of adults on shorter journeys, but they are best restricted to kids on longer travels as headroom is only so-so for grown-ups. Good news for children is the raised rear bench gives a fine view out, unlike some of the Sportage’s rivals that have high window lines. Isofix child seat mounts on the two outer chairs let you securely attached kiddy seats.

Round the back, the tailgate opens up to reveal a large aperture, but only the top level GT Line S model has a standard powered boot lid. The boot itself is typically Kia in that it’s well thought out with a flat floor that sits flush with the load sill and there’s little intrusion from the wheelarches. In its usual configuration, the boot offers 591-litres of cargo capacity, or you can extend this by dropping the 40-20-40 split and tip rear seat to free up as much as 1780-litres. In this layout, the boot retains its flat floor, which makes it easier to load and unload bulky goods.

2022 Kia Sportage engines: how does it drive?

There’s no shortage of engine options with the Kia Sportage. The range starts with the 1.6-litre turbo petrol engine that has 150hp and comes with a six-speed manual gearbox and front-wheel drive. For many, this will be more than adequate for everyday needs and the engine has good low- and mid-rev pull to make it relaxing to drive in town or on faster roads. You can also have this engine with mild hybrid technology that adds a seven-speed automatic gearbox and lowers carbon dioxide emissions by one band, which company drivers will appreciate.

If you’d rather have something with more electric power, Kia has a ‘self-charging’ hybrid model that uses a 1.5kWh battery and electric motor to give a combined power of 229hp with the 1.6-litre petrol engine. This has a six-speed automatic gearbox rather than the mild hybrid’s seven-speeder. It is quick off the mark and makes short work of joining motorways from the slip road, but the engine is too noisy even when cruising for it to rival the best in class such as the Ford Kuga or Volvo XC40. Then again, Kia has an answer to that in the shape of the Plug-In Hybrid model that has a much larger 13.8kWh battery able to carry the Sportage for up to 66.9 miles on EV power alone.

For anyone who still wants to go down the diesel route, Kia is one of the few in the sector to satisfy this demand with the 113- and 134hp 1.6-litre turbodiesel motors. The lower power version comes with a manual six-speeder, while the more powerful diesel uses the seven-speed twin clutch transmission and is also available in two- and four-wheel drive forms.

If the hybrid versions of the Sportage are a little noisy at higher speeds, the petrol and diesel models are pleasingly refined. There’s also not a great deal of wind or road noise to report in any of these Kias, and they are on a par with the Skoda Karoq for in-car hush. The Sportage also level pegs with the Skoda for handling and driver enjoyment. Neither is as much fun to drive as a Ford Kuga but, like the Karoq, there’s nothing untoward about the way the Kia negotiates corners, bumps, and uneven roads. It’s composed and confident, just not especially engaging or fun. For most drivers, that will be just right.

Around town, the Kia Sportage feels light on its toes at low speeds, so you don’t have to tug on the steering wheel to pull out of junctions or when parking. Vision is good for the driver and all parking sensors are fitted to all models, so backing into a bay is hassle-free.

Value for money: how much does a 2022 Kia Sportage cost to buy and run?

You don’t want for much with the entry-point Sportage 2 that comes with alloy wheels, rain-sensing wipers, parking sensors, climate control, cruise control, and the 8-inch infotainment touchscreen. Opt for the GT Line and you get the larger 12.3-inch infotainment display, along with keyless entry and ignition, smart cruise control, and Lane Follow Assist technology. The driver also enjoys adjustable lumbar support, and the seats are trimmed in quilted leather suede.

The Sportage 3 improves on this with part-leather upholstery and electric adjustment for the front pair, heated seats front and rear, and a heated steering wheel. This trim also has smart cruise control. In the 4, you have a panoramic glass sunroof, wireless phone charging, surround view monitor to help with parking, and an uprated Harmon Kardon Premium stereo. At the top of the range, the GT Line S offer suede upholstery, driver’s memory seat function, ventilated front seats, and a powered tailgate.

The 1.6-litre petrol model serves up a combined economy of 42.2mpg and 154g/km of carbon dioxide emissions, while the diesel manages 54.3mpg and 135g/km in its 134hp form. Opt for a mild hybrid Sportage and you can expect 44.1mpg and 146g/km, while the full hybrid delivers 49.6mpg and 129g/km. No figures were available at the time for the Plug-In Hybrid Sportage other than it can cover up to 66.9 miles on a full battery charge.

The Kia Sportage might have striking looks, but its biggest asset is it’s quite simply a very good family SUV. It dishes up a superb cabin with lots of tech and safety kit, alongside good space in the front and sufficient in the rear for most needs, as well as a large boot. The interior is not as multi-configurable as some rivals, but it’s well made and functional.

There’s a wide range of engine options to choose from in the Sportage, as well as a good selection of trims. However, the Kia is at its best in the most modest and affordable models where value remains a massive strength for Kia with its seven-year warranty and keen pricing. It’s also worth hunting in this bracket to sidestep the noisy hybrid powerplants, though the Sportage is comfortable and easy to drive in every other respect.

What could I buy instead of a 2022 Kia Sportage?

The Skoda Karoq is one of the cars that every other in this sector has to square up to if it wants to be taken seriously. There’s no hybrid power for the Karoq, which is a big advantage for the Kia Sportage, but the petrol and diesel engines in the Skoda are refined and punchy. It’s also very refined and easy to drive, comes with a solidly built cabin with lots of room, and a premium feel that few can match. Practicality is a core strength of the Karoq, and all trims are affordable and kitted out to a good level. 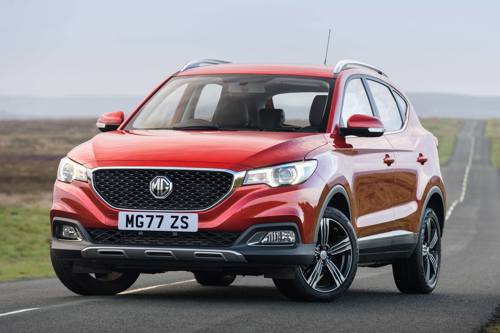 MG has assumed the budget mantle in the SUV sector, but don’t confuse that with low-rent. It’s true the cabin materials are not on a par with the Kia Sportage for their look and feel, but they are hard-wearing and you cannot pick fault with a car that comes with a seven-year, 80,000-mile warranty as standard. The ZS is also very good to drive thanks to agile handling and supple ride. You can pick form a couple of diesel engines, or there’s the ZS EV with more range than many competitors and quick charging.

The Volvo XC40 is a prince among family SUVs, graciously offering its drivers the sort of comfort and classy interior more normally associated with cars that are much larger and pricier. It’s not the cheapest car in the sector, but nor is the Volvo the most expensive, and its running costs are lower than many. The XC40 Recharge comes in hybrid and full EV versions, or you have the petrol-powered model. All are good to drive, though they favour comfort over sharp handling. As it’s a Volvo, the XC40 is also fully kitted with safety gear as standard.