BMW’s small hatch is a gem to drive, but you might need similar riches when choosing options. 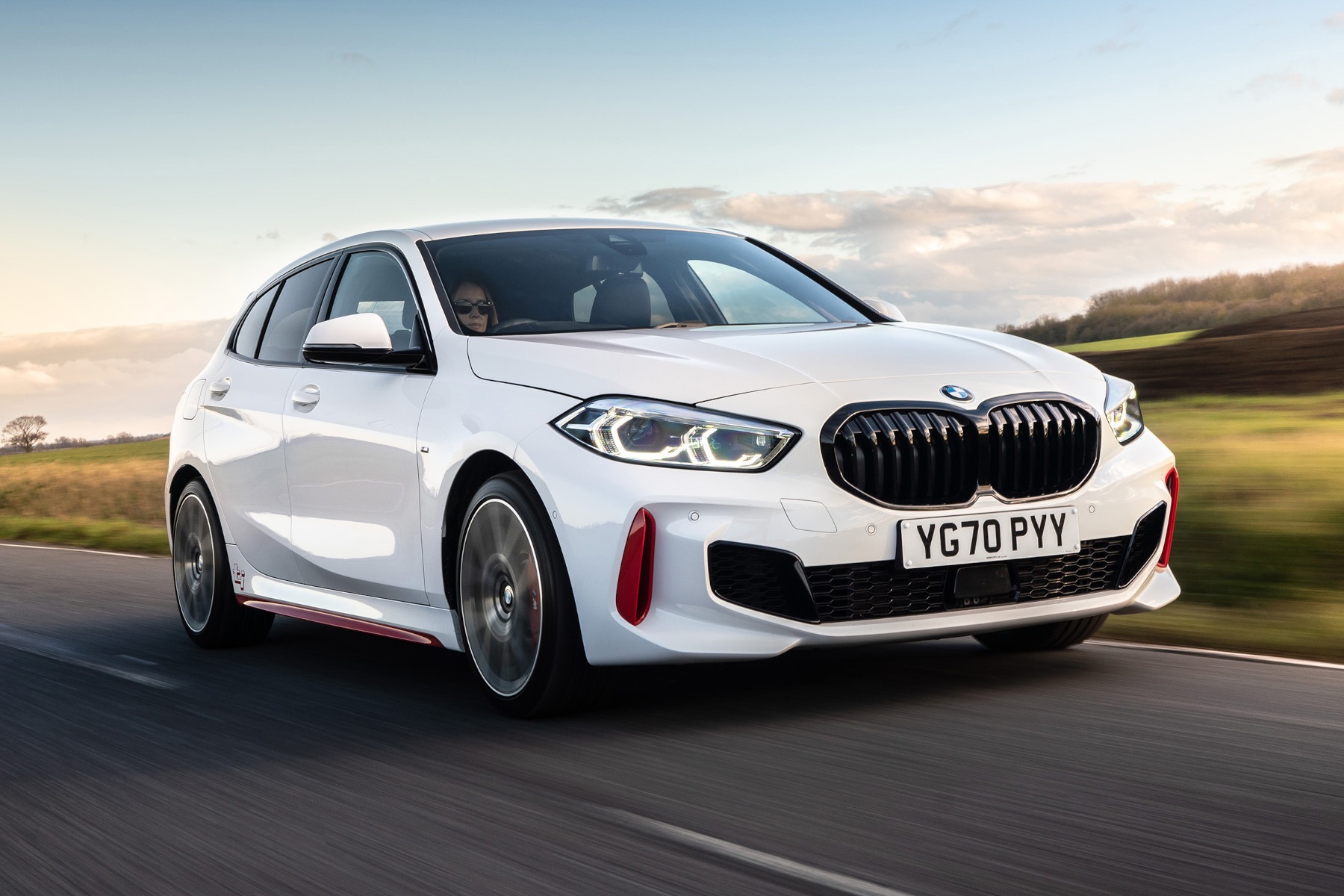 BMW may have moved to front-wheel drive for the latest generation of 1 Series, but it’s not lost its focus on a great driving experience. Where previous 1 Series generations relied on rear-wheel drive to deliver an engaging experience, the current car offers an equally dynamic drive with power going to the front wheels like all of its rivals. There’s also four-wheel drive for the most powerful petrol and diesel engines, though they do come with quite a sizeable price premium.

To power the 1 Series, BMW uses 1.5- and 2.0-litre turbo petrol engines, and turbodiesel motors of the same capacities. It delivers a range that goes from mild to wild in the performance stakes, but whichever you choose you can be sure the BMW will be among the finest handling cars at that price point. This is the 1 Series true USP when measured against rivals as it’s not quite as practical as the likes of the Volkswagen Golf or Ford Focus, which are both a touch more affordable, too.

You need to watch the pennies when specifying a BMW 1 Series as adding options can quickly ramp up the price on a car that already commands a small premium for that badge on the bonnet. The SE trim definitely needs a few extras to bring it up to the standard you would hope for, but the Sport, M Sport, ti, and M135i are all suitably attired with luxury and safety kit. All come in a five-door body now, with no option of a three-door, and that’s absolutely fine as it makes the 1 Series a more versatile machine.

If the BMW isn’t quite as roomy as some of its rivals, it does come with a superb infotainment set-up that is easier to use and offers greater clarity than others in this sector. You can also use the ‘Hey BMW’ voice commands in the same way you would with an Alexa- style personal assistant, which means you keep your hands on the steering wheel rather than fiddling with the touchscreen’s menus.

The old adage that you’ll remember the quality long after you’ve forgotten the price applies to the BMW 1 Series cabin perfectly. Yes, the German is a bit pricier to park on your drive than many of its small hatch rivals, but you sure do get a great car for the money. BMW has approached this class by building the 1 Series to the same high standards as its 5 Series, or even models from further up its range. And it’s a policy that pays off as you feel you’re sitting in a car that has been hewn from billet and is a noticeable cut above the vast majority of its competitors. Only Audi comes close with its A3.

Such rock solid build quality is backed up by a dash layout that’s neat, clear and simple to fathom. The main instruments are straightforward analogue dials with a digital display in the centre, or you can upgrade to BMW’s Live Cockpit with its all-digital display. Do you need to do this? Not really, but it does work well. The rest of the controls are all as intuitively located as you’d expect of a BMW. This includes the large 10.25-inch colour display for the infotainment, which is one of the very best in the business.

A core reason that BMW’s infotainment works so well is it is best operated by the iDrive controller set next to the gear lever. There is a touchscreen, and you can also work functions with the ‘Hey BMW’ voice control or even with the not-very-good gesture control, but the iDrive performs just like your computer mouse and makes it easy to scroll and select from the various menus screens. It’s this ease of use that makes it the best, and the menus are arranged in a way that makes sense to the user, so you can find what you need easily. It also helps the screen responds instantly to inputs and the graphics are among the sharpest you’ll find in any car, regardless of cost.

The 1 Series’ driver is treated to an excellent seating position, with lots of angle and depth movement in the steering wheel, and height adjustment for the seat. BMW charges extra for lumbar adjustment, but it’s not too expensive to add on and worth having. From the driver’s pew, the view forward and to the sides is clear and unobstructed, but the thick rear screen pillars mean you need the standard parking sensors to avoid scratching the alloy wheels or cracking the bumper plastics.

Look in the rear and this 1 Series offers a lot more room, and easier access too, than previous generations. Next to the best cars in the small hatch sector, the BMW is not most accommodating, but you can still carry a couple of adults in here without them instantly resorting to complaints. Should you choose the optional panoramic sunroof, headroom will be pinched but otherwise it’s fine without this feature.

All 1 Series come with a 60/40 split and fold rear seat to augment the 380-litre boot and boost carrying capacity to a maximum of 1200-litres. If you need a more versatile load bay, BMW offers an optional 40-20-40 division for the rear seat back.

Many drivers choosing the BMW 1 Series will consciously, or maybe even unconsciously, pick this model over its rivals for the perceived manner in which BMWs drive. It’s also true some diehards felt BMW made a mistake when choosing to favour front-wheel drive over rear-drive for its small hatch. The truth is, this 1 Series is a better car hands down to drive than its predecessors, which shows that BMW is a master of making cars fun and agile no matter which wheels are dealing with the power. You can also choose the 1 Series with four-wheel drive if you opt for either the most powerful petrol or diesel models.

The range starts with the 118i that uses a 1.5-litre, three-cylinder turbo petrol engine with 136hp. As with many engines of this design, there’s an initial gruffness when you start it up, but this quickly disappears as you rev the engine and get moving. Once on the move, the engine has plenty of pep and feels eager, helped along by the slick shift of the six-speed manual gearbox or a seven-speed dual-clutch automatic, which doesn’t always have the smoothest changes.

Next step up in the petrol range is the 128ti model with its 265hp 2.0-litre turbo motor. It’s every inch a rival to the VW Golf GTI or Ford Focus ST, with 0-62mph in 6.1 seconds, and it feels just as lively as its competitors in a straight line. It puts the power down through the front wheels with no discernible scrabble, but if you desire the ultimate 1 Series driving machine, you need the M135i xDrive that has a 306hp version of the 2.0-litre turbo petrol motor and sends power to all four wheels through the seven-speed auto that’s standard for this model. As a rival to the Golf R, this BMW’s 0-62mph time of 4.8 seconds makes it a very fast hatch.

For those who prefer diesel power, BMW gets things started with the 116hp 116d model. It uses a 1.5-litre three-cylinder turbodiesel that, like its petrol counterpart, is a little coarse when fired up but quickly gets into its stride as you drive off. It has plenty of low-down urge and is a fine commuter car, but for anyone spending more time in the car or travelling longer distances, the 118d with its 150hp 2.0-litre turbodiesel is a wiser choice thanks to its more muscular power delivery and better refinement. Alternatively, you can choose the 120d with 190hp and standard seven-speed auto transmission rather than a six-speed manual. It’s a lively performer yet also frugal.

All 1 Series turn into corners with a precision that only a Ford Focus comes close to. It’s not nervous or twitchy, just a zestful keenness to help you enjoy the drive and it’s backed up by more than enough grip to keep the BMW stable and on the right line. Choose the four-wheel drive models and they are even more dedicated to following whichever path your steer them on through a corner. There is a firmness to the 1 Series’ suspension, but not as much as in previous generations. If you choose the M Sport or M135i models, this does lean towards the very sporty side of acceptable, but it’s never too harsh. However, at higher speeds you will notice more road noise than in a Golf or Skoda Octavia.

The 1 Series in SE trim comes with 16-inch alloy wheels, cloth seats, cruise control, all-round parking sensors, and 10.25-inch displays for the main instruments and the infotainment system with iDrive controller. Move to the Sport and you gain 17-inch alloys, different front bumper, sports front seats, dual-zone climate control, and BMW’s Performance Control to apply power to or brake each wheel to give the best possible grip. M Sport models have 18-inch wheels, an anthracite headliner, heated front seats, unique cloth upholstery, and M Sport badges. With the 128ti, you get unique red highlights for the front bumper air intakes and side skirts, and unique upholstery. Lastly, there’s the M135i with its model-specific wheels and bodykit.

BMW has one of the finest small family hatches you can buy in the shape of the 1 Series. It doesn’t come cheap, mind you, and it’s easy to add to that cost when you start to tick the many options on offer. However, if you keep it relatively simple and stick to the more mainstream models, the 1 Series is a better car than its premium rivals from Audi and Mercedes, as well as pricier versions of others such as the Volkswagen Golf or Ford Focus.

For driving fun and the pleasure of sitting in such a well-made cabin, the BMW is unbeatable. However, it’s not at practical or versatile as others in this sector, so that will guide some buyers to alternative offerings. For most, though, the BMW ought to be in your considerations.

The Audi A3 is one of the BMW 1 Series’ sworn enemies and the two vie for many of the same customers. However, where the BMW will undoubtedly attract many with the appeal of its drive, the Audi relies on other charms such as its sharp looks and wide engine range that offers a number of very frugal choices. You’ll also find more standard kit in the Audi than the base BMW, but the A3’s cabin doesn’t feel as well made. Nor do the materials in the Audi feel quite as solid as those in the 1 Series.

Don’t scoff at the idea of the Skoda being a rival to the BMW. While most outward and obvious comparisons make the Skoda look like it will trail in a distant second to the BMW, the Scala is extremely roomy and that makes it very practical, which many drivers will value every bit as much as the BMW’s driving talent. The Skoda is also generously equipped, very keenly priced, and it’s also good to drive in a laid-back, comfortable manner. However, a bit too much wind and road noise can be heard at higher speeds in the Czech car.

If you want a curveball alternative to the BMW 1 Series, you can rely on the French to serve one up. And here it is in the crisply creased form of the DS 4, which has a very distinct style and presence on the road. The same applies to the interior, which is a truly classy place to be and one of the few that can be considered a true rival to the BMW for the way it looks and is put together. There’s also a long list of standard equipment with the DS 4, but you will have to put up with a very firm ride as you enjoy this delightfully unusual French machine.