Brits love the great outdoors, so it should come as no surprise to discover that Britain is one of the biggest markets for convertible cars. In Europe, only the Germans buy more drop-tops than the Brits.

This might seem odd when it feels like the number of sunny days can be counted using the fingers of one hand, but it makes sense. The temperature is rarely too hot to get the top down, while the British countryside is perfect for a drive with the wind in your hair and the sun on your face.

There are many convertible cars to choose from, including small cars perfect for a romantic getaway and large cabriolets with enough space for four. Some have fabric folding roofs, while others have metal roofs to give you the best of both worlds.

Unless they’re designed from the ground up without a roof, convertibles are rarely as good to drive as their hard-top equivalents. Some feel as rigid as a blancmange on bucking bronco. The BMW 4 Series Convertible, ahem, bucks the trend by driving as well as the 4 Series Coupe. The fabric roof is 40 percent lighter than the old folding metal roof, which is great news for both handling and fuel economy. The interior is rich in quality, there’s enough room in the back for actual people (don’t take this for granted in a convertible), and there’s a good range of petrol and diesel engines. 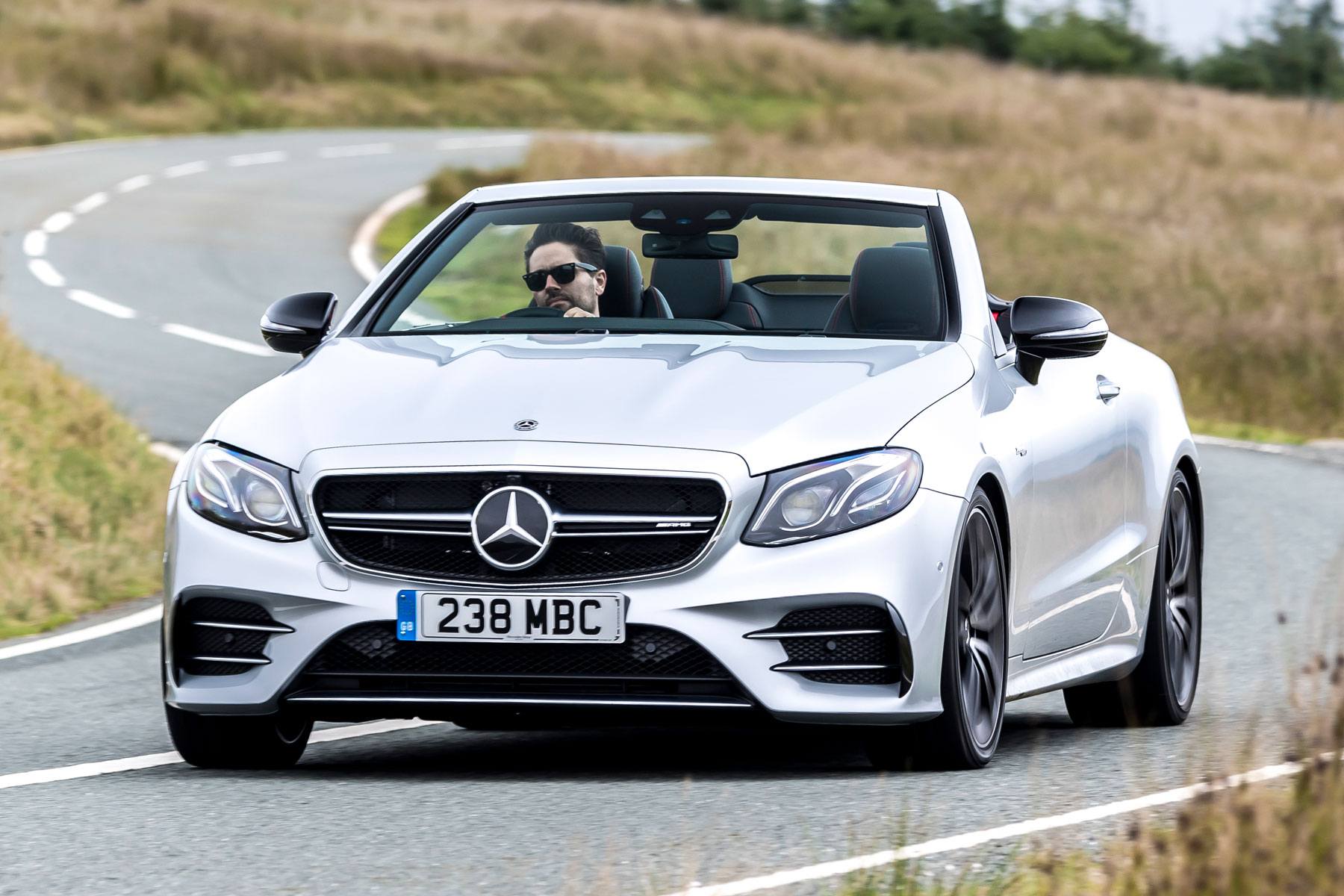 Using the entirely made up ‘Goldilocks’ method of choosing a Mercedes-Benz Cabriolet, the E-Class is ‘just right’. It offers the quality and space of the larger and considerably more expensive S-Class Cabriolet, along with the agility and value of the smaller C-Class. In fact, we’d rank it alongside the 4 Series Convertible in the battle of the best family drop-tops. With the multi-layered fabric roof up, the E-Class Cabriolet is as cosetting as the E-Class Coupe, offering enough room for four adults and their luggage. It’s also extremely comfortable with the roof raised or lowered. The AMG E 53 version features a six-cylinder engine producing 435hp.

The TT Roadster is even more appealing than the Audi TT Coupe. Sure, you lose the rear seats, but that’s no big deal, and the boot is only slightly smaller. Unlike many convertibles, you don’t lose luggage space when the roof is lowered, so you won’t have to leave your belongings by the roadside when the sun comes out. The fabric roof can be lowered or raised in 10 seconds flat, so there’s no need to panic when the weather turns a bit ‘British’. Even the basic Sport model features a long list of standard equipment, so you don’t need to splash out on one of the more expensive trims. 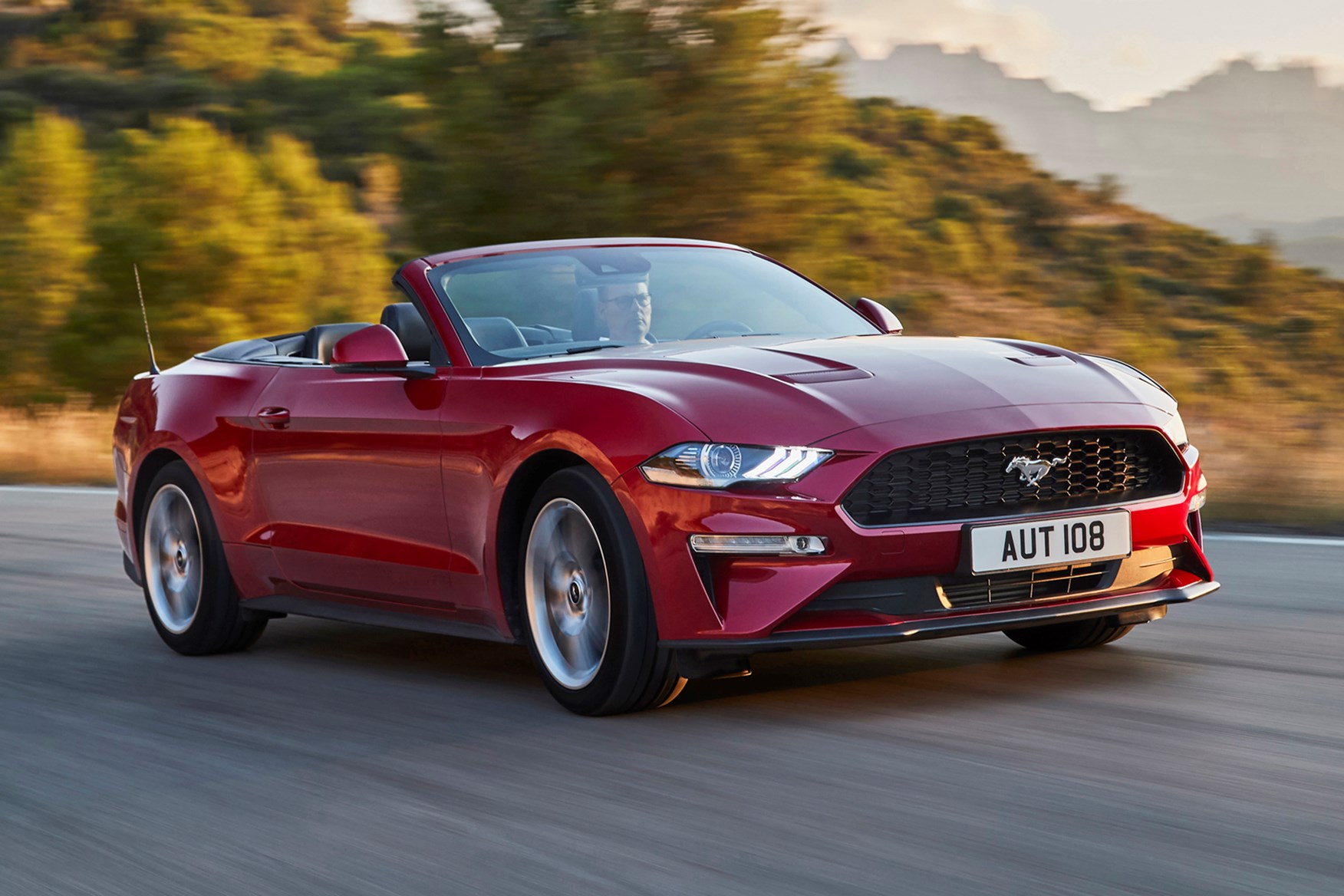 In the past, you could accuse the Ford Mustang of being a one-trick pony: great in a straight line, but a bit lacking in the cornering department. Today’s Mustang is a different animal, so you don’t need to say your prayers before taking a bend. Sure, the Mustang Convertible isn’t quite as sharp as the Fastback, but it does allow you to enjoy the sound of the 5.0-litre V8 engine in all its glory. You can even invite some of your friends, because the rear seats are suitable for a couple of adults. Look out for the California Special for a dreamy spec.

The highest praise we can give the MINI Convertible is to say that it drives as well as the regular MINI Hatch. In other words, it’s brilliant. There are a few compromises, such as a small boot, which is even smaller with the roof down, and a draughty experience for anyone travelling in the back. This is why we reckon the MINI Convertible suits couples, as the rear seats are perfect for some additional luggage space. The roof can be lowered in 18 seconds at speeds of up to 20mph, and you can even download an app that tells you to close the roof if it’s raining where you left the car.

With prices ranging from £84,000 to £113,500 before options, you could be forgiven for thinking the standard BMW 8 Series Convertible is expensive. That’s until you discover that it’s capable of mingling with drop-tops from the likes of Bentley and Aston Martin. It’s only marginally heavier than the 8 Series Coupe and only slightly less stiff, so the Convertible is fantastic to drive. Even the ‘basic’ 840i Sport will hit 62mph in just 5.5 seconds, while the 850i will complete the sprint in 4.1 seconds. The flagship M8 Competition Convertible features a 625hp twin-turbocharged V8 and costs a cool £136,000.

The RF offers something different to the standard Mazda MX-5. RF stands for ‘Retractable Fastback’, which means it ditches the fabric roof of the MX-5 sports car for an electric folding hard-top. With the roof up, the RF feels like an MX-5 coupe, so it’s ideal if you’re after the security and quietness of a metal roof. Press a button and the roof folds away in a display of origami engineering (if that’s a thing), leaving you with an MX-5 that’s every bit as good to drive as the standard version. The RF is more expensive and we’d recommend the 2.0-litre engine for coping with its additional weight.

The roof of the Audi A5 Cabriolet can be opened in 15 seconds at speeds of up to 31mph, and closed again within 18 seconds. In most other respects, the A5 Cabriolet offers the benefits of the A5 Coupe, including smart styling, a quality interior and a range of petrol and diesel engines. It’s not as sharp to drive as a BMW or as comfortable as a Mercedes-Benz, but the A5 Cabriolet is still an excellent choice. There’s space in the cabin for four adults, along with a boot offering a class-leading 380 litres of luggage capacity. Just note that you’ll lose 60 litres with the roof down.

Fancy a wildcard? Land Rover tried, and failed, to convince us that a Range Rover Evoque Convertible would be a good idea, so why has Volkswagen launched the T-Roc Cabriolet? In theory, it should offer the best of two worlds: the practicality of an SUV and the attraction of a convertible. The roof can be lowered in nine seconds at speeds of up to 19mph, and while it’s not as practical as the regular T-Roc, it should be fine for young families. There are two trims: Style for posing and R-Line for a slightly sportier driving experience. 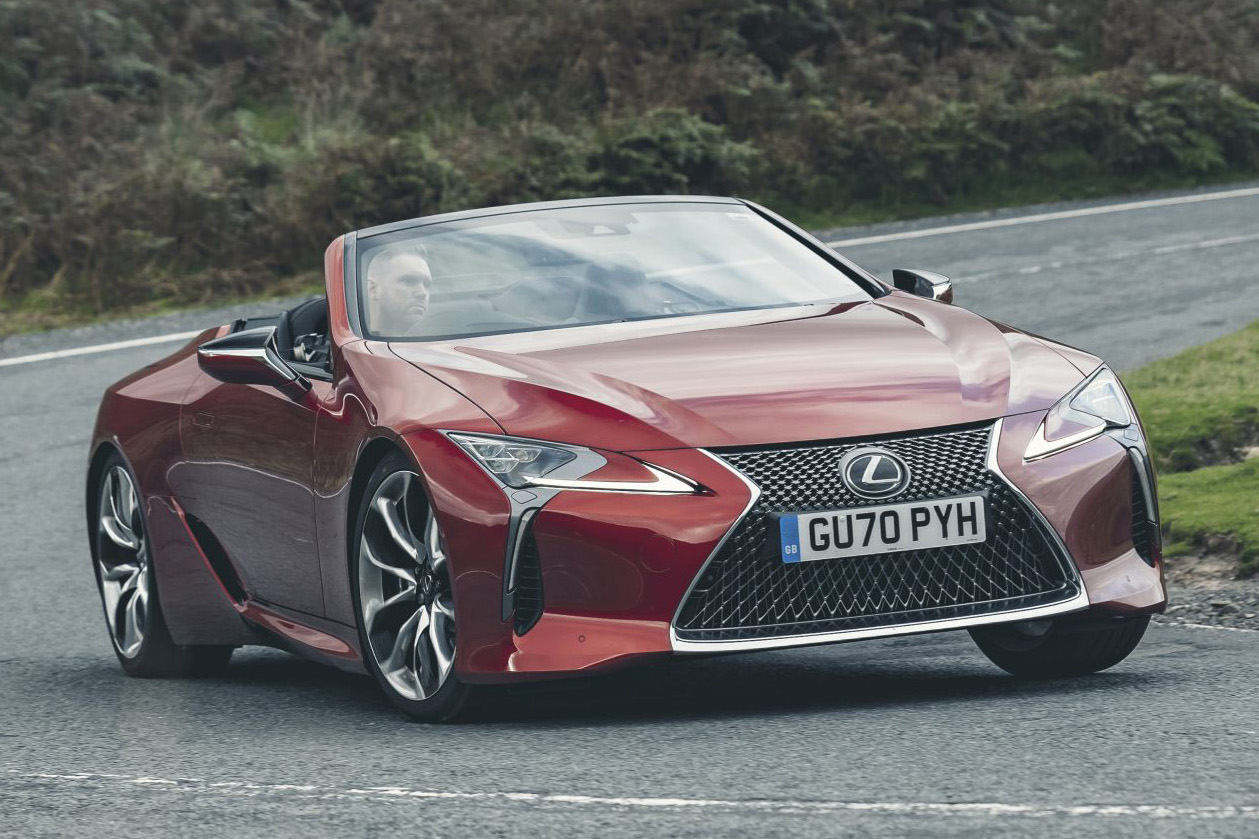 Beautiful, isn’t it? In fact, we think the Lexus LC Convertible is capable of upstaging any six-figure supercar. Granted, it comes with its own six-figure price range of £97,000 to £106,000, but few cars offer such a compelling blend of style, performance, quality and reliability. The roar of the fabulous 5.0-litre V8 engine is fed into the cabin via a sound generator, while the roof can be opened or closed in 15 seconds at speeds of up to 31mph. Practicality isn’t a strong point, not least because the boot is smaller than that of a MINI Convertible.

Are convertibles expensive to insure?

Convertibles are often more expensive to insure than their tin-top counterparts. Fabric roofs are prone to vandalism, so your insurance premium could rise if the convertible is parked overnight on the street outside your house. Convertibles are also more expensive to repair in the event of an accident. One way to avoid an expensive premium would be to look at convertibles with a folding metal roof. With the roof up, these cars look like regular coupes, and are less likely to be targeted by criminals.

What happened to folding metal roofs?

Many manufacturers have ditched folding metal roofs in favour of simpler fabric tops. Not only are fabric roofs less complex than metal equivalents, they’re also lighter, which is great for fuel economy and the way a car drives. Fabric roofs also take up less room when they’re lowered, which improves the practicality of a convertible. The Mazda MX-5 gives you the choice of either a traditional fabric roof or a folding metal hard-top.

Which is the best convertible in the world?

Money no object, the Rolls-Royce Dawn is the best convertible in the world. Every Dawn is built bespoke at the Rolls-Royce factory at Goodwood, with levels of engineering and craftsmanship that are unrivalled in the convertible sector. Sure, the purchase price and running costs are off the scale, but that’s the price you pay for ultimate luxury. In the real world, the Mercedes-Benz E-Class Cabriolet and BMW 4 Series Convertible are two excellent options.